BLITZKRIEG: Re-Recorded Version Of 'A Time Of Changes' To Be Made Available Next Month

2015 marks the 35th anniversary of the English classic rock band BLITZKRIEG who came into existence in 1980. Although their debut single, “Buried Alive” b/w “Blitzkrieg” (on Neat Records) was released in 1981, it was not till 1985 that the band recorded its debut album, as vocalist Brian Ross was involved with his other group, SATAN, recording and touring their debut opus, “Court In The Act”.

30 years on, because of catalogue sale and resale, “A Time Of Changes” is lost in the vaults of corporate hell and may never see the light of day again. That said, the current line up of BLITZKRIEG wanted this album available to fans so they have completely re-recorded the album and added two bonus tracks, one of which, “Too Wild To Tame”, should have made the LP back in 1980 but did not fit due to vinyl time restrictions. (It was originally covered by another Neat Records stablemate, AVENGER, in the 1980s.) The second bonus track, “Jealous Love”, has never been released before, although it was written at the same time as the rest of the album.

Great new artwork has been commissioned for the new version of “A Time Of Changes” by South American artist Ivan Chacon. The set comes with a new 12-page booklet full of sleeve notes by Brian Ross, lyrics and new photos from the past and present lineup.

“A Time Of Changes” includes BLITZKRIEG‘s self-titled song “Blitzkrieg”, which was covered by METALLICA on the “Creeping Death” EP. METALLICA‘s drummer, Lars Ulrich, commented that BLITZKRIEG was one of his band’s main musical inspirations, along with DIAMOND HEAD.

Brian, the only remaining founding member of BLITZKRIEG, said: “Lars Ulrich phoned me up and asked if they could cover the song.

“METALLICA were, and still are, big fans of the band. We have met up with them a few times over the years and I am really pleased that they still play ‘Blitzkrieg’ at gigs.”

Brian said that he tried to give the then-unknown METALLICA a helping hand in the early 1980s.

“They sent me their demo when they were still unsigned, asking for my help to get them on our label,” he said. “But the label turned them down, saying they’d never go anywhere.

“I met up with the guy who made that call a few years ago and he says it is the biggest mistake of his life.”

The album will be released in Europe by BLITZKRIEG‘s longtime label Metal Nation Records. There will also be a vinyl version of the album on High Roller Records in Germany.

BLITZKRIEG‘s South American dates will be the last for this year, starting in Ecuador and continuing through Colombia, Peru, Chile, Argentina and Brazil. A European tour is also being arranged for 2016. 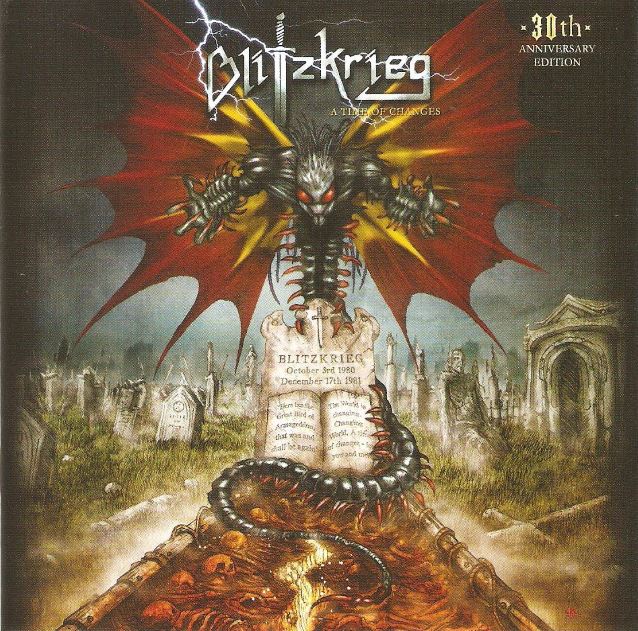 BLITZKRIEG: Re-Recorded Version Of 'A Time Of Changes' To Be Made Available Next Month
Mary October 5, 2015October 5, 2015 Rock News No Comments