ANTHRAX is rumored to have set “For All Kings” as the title of its long-awaited new album, set for March 2016 release via Megaforce in North America and Nuclear Blast in Europe.

Beginning in the fall of 2014, ANTHRAX — Charlie Benante (drums), Scott Ian (rhythm guitar), Frank Bello (bass), Joey Belladonna (vocals), and lead guitarist Jon Donais — took their time in the studio recording the follow up to their Grammy-nominated, critically acclaimed 2011 album, “Worship Music”. The band recorded some 20 original songs, almost twice as many as they had ever brought into the studio in the past. In terms of how the new music sounds, Bello said, “The thing about ANTHRAX…we have this heavy, thrashy music and Joey’s powerful and melodic vocals. I love heavy music, but I also love melody, so the challenge is to blend them together so they sound like ANTHRAX. I think we’ve done a really good job of that on the new album.”

The official lyric video for the song “Evil Twin”, taken from ANTHRAX‘s new CD, can be seen below. The clip is a compelling barrage of places, victims, actions, and some of the infamous zealots and others who have perpetrated violent extremism on innocents around the world, aptly exemplifying the song’s powerful message.

“Evil Twin” is now available digitally, and can be purchased via Apple Music, iTunes and Amazon.

Musically, “Evil Twin” is a full-on thrash-metal tune that blasts off with a raging guitar riff, accelerates expeditiously and is completely uncontrollable.

“Yeah, that opening riff is really evil,” laughed Benante. “We had done a lot of touring with DEATH ANGEL and EXODUS, so I was in a really thrashy state of mind when I starting writing the riffs for that song. I think along with Scott‘s lyrics and Frank’s melodies, we came up with a really great, old-school thrash metal feel.”

As Bello put it, “it’s a song that begs to be played live.”

Lyrically, the track unapologetically denounces the self-righteous religious extremists who spread their bloody terror under the guise of a Holy War.

“I was very affected by the Charlie Hebdo massacre as I have been with all of the shootings that have taken place at schools and movie theatres,” said ANTHRAX‘s lyricist Scott Ian. “I can’t figure out what would cause someone to think that was the right thing to do. ‘I’ll show the world, I’ll make my God happy.’ It’s just such bullshit. I’m not bagging on religion, that’s not my intent, but people who go to that extreme, who feel they have become judge, jury and executioner over their fellow man because you or I don’t believe the same thing they do, I think that’s the ‘Evil Twin’ of humanity. Writing words about that is my only catharsis.”

ANTHRAX has just joined “Big Four” comrades SLAYER on a seven-week European tour that kicked off on October 25. 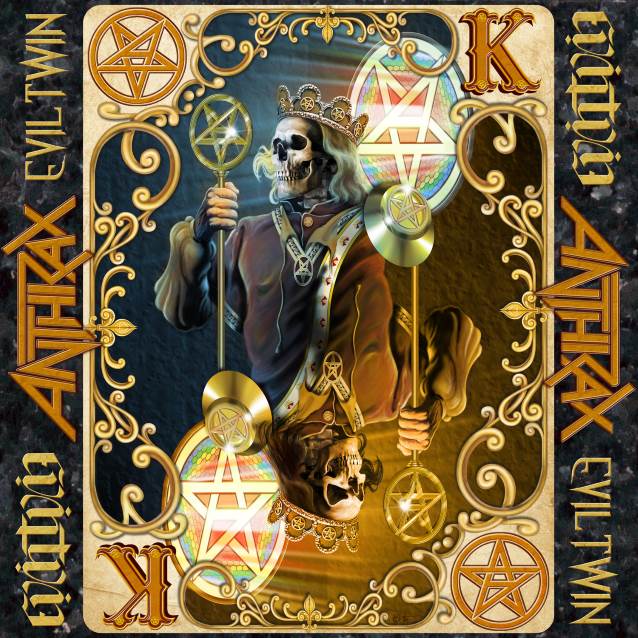