French singer, songwriter and multi-instrumentalist Stéphane Honde (pictured; HOLLYWOOD MONSTERS, THE STARS) has assembled an all-star lineup of rock musicians — including former IRON MAIDEN singer Paul Di’Anno, STRYPER frontman Michael Sweet and ex-BLACK SABBATH and DIO drummer Vinny Appice — to record cover version of the David Bowie song “Heroes” to benefit victims of the November 13, 2015 Paris terrorist attacks. The song will be available for digital download on CD Baby and iTunes by the end of January or in early February.

All proceeds from the sale of the single will go to the Association Française Des Victimes Du Terrorisme (English translation: French Association of Victims of Terrorism).

Said Di’Anno: “I left it up to Steph to get the rest of the band together, but we’ve got a couple of the usual old suspects, like Rudy Sarzo [ex-QUIET RIOT, OZZY OSBOURNE and DIO bassist], ” Di’Anno said during an interview with Canada’s The Metal Voice.

“It’s just a few of us quite well-known musicians. It’s more of a private thing, I think, more for me and Stéphane, more than anything, ’cause we are European.

“So we wanna try to get this thing out. And you can download it and pay for it, and the money goes to a charity thing.”

Di’Anno added that the part of what made the Paris attacks so shocking and hit so close to home was the fact that the greatest number of deaths took place at an EAGLES OF DEATH METAL concert, or a rock concert in general.

“It’s quite scary at the moment, especially now that musicians are being targeted as well,” he said. “It’s a bit scary.

“Poor old France, it’s been getting the shit kicked out of it recently.”

The recording lineup for the single is as follows: 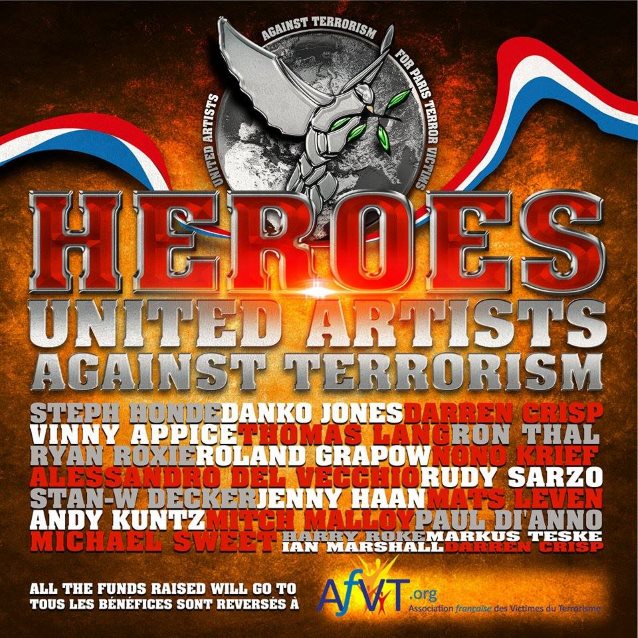