“Light Of 1000 Eyes”, the new video from U.K./Swedish melodic rockers SEVEN, can be seen below. The song is taken from SEVEN‘s new album, “Shattered”, which will be released on September 23 by U.K. label Escape Music Ltd.

The roots of SEVEN can be traced back to the late ’80s/early ’90s in South Africa, of all places. At the time, Keith McFarlane and the brothers Simon and John LeFevre were in a band called FACE TO FACE, while Mick Devine was drummer in another band, called UC27. After releasing several singles and one album in a period of 18 months, FACE TO FACE split and the brothers LeFevre returned to the U.K. After a few months, they decided to reform the band and Mick was asked to join them in the U.K. as their drummer. It wasn’t before long that the brothers discovered that Mick was actually a better singer than drummer, and so Mick became the band’s lead vocalist. A couple of years later, they were joined by Pat Davey on bass and Austin Lane on drums and the band name was changed to SEVEN.

The AOR scene in the late ’80s was a thriving hive of activity. At the turn of the new decade, the likes of Mitch Malloy, Paul Laine, FIREHOUSE, TYKETTO and TALISMAN were all signed up and ready to make an impact on the genre. Everybody wanted an AOR band, and Polydor Records was no exception. Having been fairly successful in the U.K with the likes of MAGNUM and LITTLE ANGELS, the label had set their sights on SEVEN, which at the time was a relatively unknown act from Bournemouth.

SEVEN toured extensively supporting an eclectic variety of acts that included the likes of Jason Donovan, Richard Marx, THE MONKEES and BROTHER BEYOND. It’s a time period that Mick Devine is keen to reminisce about. “Even though they were out and out pop gigs, we loved the crowds and the noise,” he says. “We went from pubs to opening to 3000 screaming fans in Southampton. It is a very addictive adrenaline rush. We got to play all the top venues, which were fantastic — including Wembley Arena, the NEC, BIC, SEC and even the Royal Albert Hall. The Richard Marx tour was definitely the best for us with a more grown up audience we were able to rock it up and truly be ourselves. It went down really well!”

With John Parr as producer, they recorded two very strong singles in the shape of “Inside Love” and “Man With A Vision”, both of which achieved moderate success in the U.K.

In 2014, the original bass player Pat Davey was working alongside Robert Hart on an Escape Music album when the name SEVEN cropped up in the conversation. It would seem that Khalil Turk was a big fan, as Devine explains. “Yeah, back in the day, Khalil had really loved the band and he got in touch to see if we would be interested in finally releasing an album,” he says. Without too much convincing, the project was born.

The production talents of Lars Chriss (the LION’S SHARE guitarist whose repertoire includes albums with Steve Overland, Chris Ousey, LUGNET and RADIOACTIVE) were enlisted to produce the band’s debut album, called “7”, which was released to critical acclaim and was held up as one of the “albums of the year” on many lists.

Following the success of the first album, a passion was rekindled within Devine and McFarlane, who began work on new material, and along with the writing talents of Lars Chriss, Fredrik Bergh (BLOODBOUND, ROB MORATTI, STREET TALK), Andy Loos (LION’S SHARE, GLORY, CHRIS OUSEY), Kay Backlund (LION’S SHARE, NIVA) and Jeff Paris (MR. BIG, Y&T, VIXEN, RADIOACTIVE), that passion was given focus and a place to come to life. What they discovered was a well of untapped creativity that had been hidden for far too long and the songs poured out.

SEVEN‘s “Shattered” is a collection of wonderfully catchy songs that rely on clean and memorable melodies that allow Devine‘s distinctive voice to shine through. It was Devine who took the lead in writing the lyrics on this album, matching the intensity and feel of the music to deliver a modern melodic rock album with influences ranging from hints of FOREIGNER in “A Better Life” and “Broken Dream”, JOURNEY in “High Hopes” and even traces of MAGNUM in “Light Of 1000 Eyes” and “Last Illusion”. The lyrical themes are drawn from a depth of life experience and observations and are heartfelt and real. The production talents of Chriss and the lineup of truly great musicians, deliver an album of depth and variation which ranges from driving guitar-led tracks with memorable riffs to melodic anthems, all backed by stunning keys, bass and standout solos. It is an album that is a worthy follow-up to the critically acclaimed “7”. 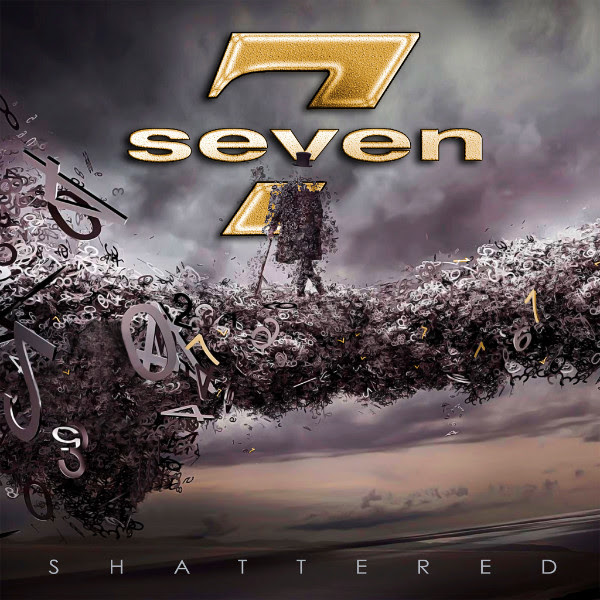