Fan-filmed video footage of the entire first show of the trek, which kicked off on February 9 at the O2 Institute in Birmingham, England, can be seen below.

Despite the fact that “Among The Living” was ANTHRAX‘s third album (following 1984’s “Fistful Of Metal” and 1985’s “Spreading The Disease”), guitarist Scott Ian told Metal Hammer that the band wasn’t being forced by the record company at the time to make any big commercial breakthrough. “We were under no pressure at all,” he said. “We had no time limit for writing or recording. The way we worked back then, when there were enough songs for an album, then we’d go in and do it. We never wrote more than was necessary. In a way, I now regret that situation. We were on such a roll that perhaps someone should have persuaded us to carry on writing. Who knows what else may have come out? When you’re in that zone, there’s a lot to be said for staying in. I’m not criticizing what’s on ‘Among The Living’, but we may have benefited from being a little less hasty in finishing up the writing side.”

Regarding the recording process for “Among The Living”, Scott said: “We had just come off the METALLICA tour in the fall of ’86 when [METALLICA bassist] Cliff Burton was killed, and we had come off that tour obviously early because of the tragedy. And that’s when we started recording that record, pretty much right after that. I feel like the energy just really jumps off that record; you fucking hear how pissed off we are playing our instruments on that record. There’s a brutality on that album that you don’t hear on the two records before ‘Among The Living’. It was just the record of its time; it really was.”

When ANTHRAX‘s “Among The Living” full-album performance at the 2014 edition of the Sonisphere festival was first announced, Ian said: “A long time ago in a galaxy far far away (1986, New York City) we wrote a record that at the time, we had no idea would become our ‘signature’ record. We had a song about the plight of the American Indian, we had songs about Stephen King characters (Randall Flagg from ‘The Stand’ and Todd Bowden from ‘Apt Pupil’), we had a song dedicated to Cliff Burton and another about John Belushi‘s clichéd death. We had a song about Judge fucking Dredd and we had a song called ‘Caught In A Mosh’. We had songs.’

He continued: “When ‘Among The Living’ punched the world in the face in 1987, it launched ANTHRAX into a high-speed trajectory that we could barely keep up with. Like going from 0-200 kph in 5 seconds flat. Our heads were spinning as fast as they were banging, and [nearly 30] years later, nothing has changed.” 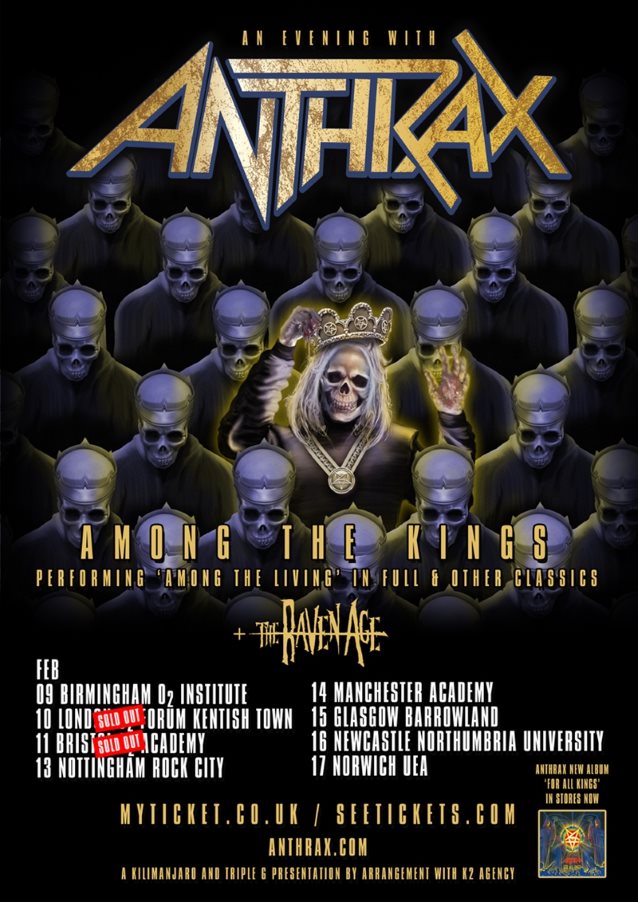