MEGADETH, THE OFFSPRING, QUEENS OF THE STONE AGE, Others Confirmed For MONTEBELLO ROCKFEST

The team behind Montebello Rockfest, the largest rock festival in Canada, has unveiled the complete lineup for the twelfth edition, to be held June 22-25 in Montebello, Quebec, Canada.

Rockfest features a mature lineup that consists of 125 rock, metal, punk rock, hardcore, and hip-hop acts. Most of them will make their first appearance at the festival.

Previously announced headliner RAMMSTEIN from Germany will present its brand new show, a Canadian exclusive and a North American premiere. Other headliners include California’s QUEENS OF THE STONE AGE in their first North American performance in three years. Iggy Pop — the Godfather of punk and a true living legend — will be in town to deliver one of the last shows before his retirement.

Also in the lineup: defunct Canadian band ALEXISONFIRE for a rare reunion show, heavy metal legends MEGADETH, Californian punk rockers THE OFFSPRING (performing their album “Ixnay On The Hombre” in full), New York rappers WU-TANG CLAN, U.K. group BULLET FOR MY VALENTINE, and a slew of punk rock bands from California: AFI, BAD RELIGION, PENNYWISE and GOOD CHARLOTTE (the latter for their first show in Quebec in 10 years). These artists will be joined by 311 (first show in Quebec in ten years), EAGLES OF DEATH METAL, THURSDAY (reunion), BOB MARLEY EXPERIENCE, and many more.

Wristbands will be available soon at Empire stores throughout Quebec. Once again, festival passes are offered at a very reasonable price: $123 + fees and taxes — that’s less than $1 per band! Visitors can pay their order in five instalments. With the excitement generated up to now, including two sold-out presales, and such a strong lineup, the team is convinced that the event will sell out for the fifth consecutive year. VIP packages are also available.

Church grounds will be completely revamped this year with the first edition of Rockfest‘s Tattoo Convention and a new Gourmet Rock Food zone with a warm and cozy atmosphere. On the camping front, they are now adding a Mega VIP Camping package. This one is an all-included “hotel experience”: tent provided and setup, mattresses, sleeping bags and parking are included, plus everything in the VIP Camping package. Incidentally, the VIP Camping package is loaded with new features, including several intimate-sized performances by artists featured at Rockfest 2017. General camping and RV camping options are also available. 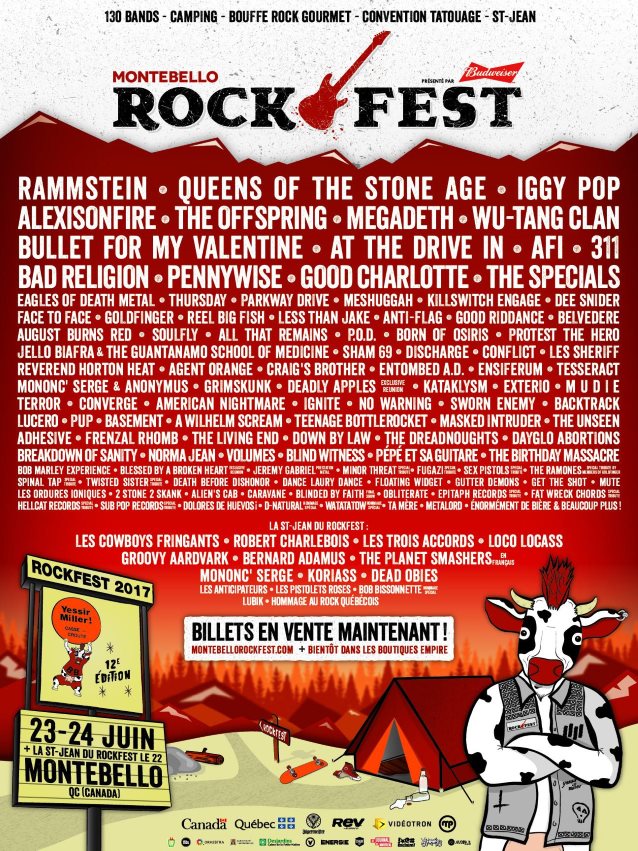