According to Billboard.com, WARRANT‘s cover of “I Think I’ll Just Stay Here And Drink” has been selected as the Professional Bull Riders‘ new “party anthem. The song will also appear on WARRANT‘s next album, “Louder Harder Faster”, which will be released in April via Frontiers Music Srl.

“During the 2016 PBR World Finals, we were fortunate to have WARRANT headline Saturday night in Toshiba Plaza, and they put on an incredible show for our fans, said Sean Gleason, the CEO of PBR in a statement. “When we found out the band are PBR fans, we jumped at the chance to work together on a custom music project and to make them a featured act during the 2017 season.”

The official video for “I Think I’ll Just Stay Here and Drink” was premiered last night at PBR St. Louis. The clip was filmed in Anaheim, prior to the PBR Built Ford Tough Series at the Honda Center earlier in the month.

“Creating a party anthem is what WARRANT loves to do and getting a chance to create one for the ‘toughest sport on dirt’ is a bonus,” said WARRANT guitarist Erik Turner. “We’re pumped up to rock PBR Bars and events all year long.”

“Louder Harder Faster” was recorded with producer Jeff Pilson, a veteran bassist who has played with DIO, FOREIGNER, DOKKEN and T&N, among others, and is currently being mixed by Chris “The Wizard” Collier (FLOTSAM AND JETSAM, PRONG, LAST IN LINE).

Speaking to “The Rock Brigade” podcast, WARRANT singer Robert Mason stated about the long-awaited follow-up to 2011’s “Rockaholic”: “Our songs are turning out really cool. I’m pretty freakin’ proud of this. I’m about as proud of this, vocally and performance-wise, as I was… I mean, the ‘Rockaholic’ record I love — still do — but the CRY OF LOVE record that I did a bunch of years ago, I’m still fiercely proud of those vocal performances. And it’s not a reflection about the songs or the style or anything like that. It’s just… For my two seconds of being selfish, ’cause I’m a lead singer and that’s what people expect of me anyway, I’m really proud of the vocal performances on this record. And, obviously, we all do our part.”

On the subject of the new WARRANT album title, Mason said: “Here’s the way that came about. On stage, since probably ’09, ’10, ’11… I don’t remember when; maybe it was after our record [was released]. But as a thing to say between… It kind of just came out of my mouth one day — ‘louder, harder, faster’ — and I screamed it into the microphone and we started the next song. It was kind of one of those dumb things lead singers say to break up the dead air between songs in live shows. And it kind of stuck in my head and I started doing it. It was a thing I kind of started saying. And one day I had a riff in my hands and a guitar in my house, or in a hotel room, and then it turned into, ‘Oh, guys, by the way, I wrote this song. It’s called ‘Louder, Harder, Faster’.’ And I think I half-drunkenly said in a hotel bar one night, maybe three or four years ago, ‘Oh, by the way, the record should be called ‘Louder, Harder, Faster’, ’cause I have this fucking song.’ And, you know, that’s what cocky lead singers say to their guitar players. And I think Joey Allen [WARRANT guitarist] was, like, ‘Yeah, yeah. Blah blah blah. I’ll believe it when I hear it.’ So there you go. When we came up with the songs for this record, it just kind of became obvious that that was the… If you’re gonna name it after one of the songs, there you go.”

Regarding the musical direction of WARRANT‘s new album, Mason said: “I wanted to come out with a record that… And I know it almost sounds pompous to say, so I really hope people take this in the right spirit. True fans maybe will. My initial vision for this was, musically and sonically, between the big-anthem, memorable, hooky kind of stuff of ‘Cherry Pie’ [1990] and then the little bit darker, little bit harder of ‘Dog Eat Dog’ [1992]. And it kind of like… Towards the writing of it, [Jerry] Dixon‘s [WARRANT bassist] got a real pop sense, I just wanna do rock and scream. I talked with Joey early on, and I’m, like, ‘Dude, I want this thing to just crush. We’re not getting any younger. How many more years can we do a real serious rock record before it’s comical because we’re 70?’ You know, like, really?”

Turner spoke to the “Talking Metal” podcast last fall about how WARRANT‘s new material was shaping up. He stated at the time: “I would call it a cross between classic ’70s hard rock and ’80s hard rock that we’re known for, from everything that I’m hearing from the demos. It’s pretty rocking stuff, but it has that melodic sensibility. We all grew up on pretty much the same bands. Robert‘s heavily influenced by not only ’80s rock bands but guys like BAD COMPANY, Paul Rodgers, Steve Marriott… So a little more grit, a little more blues, rock, I would say, with some good melodies… That’s how I would describe it.” 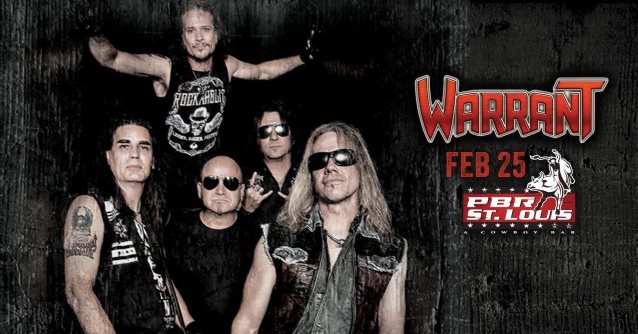