METALLICA has enlisted DJ and producer Mix Master Mike to take part in the upcoming North American leg of the band’s “WorldWired” tour.

The band said in a statement: “Mike will be spinning some of your favorite (and ours!) hard rock and metal tracks throughout the evening at all of the stadium dates this summer. A pioneer in the hip-hop and DJ communities, you’ll be able to catch his skillful, hard-hitting scratch work once the doors open each night and between acts before we hit the stage.

“Named as the ‘world’s greatest DJ’ by USA Today, Mix Master Mike has won Grammys, been inducted to the Rock And Roll Hall Of Fame as a member of the BEASTIE BOYS, spun at the Vancouver Winter Olympics and the Emmys, and has created music that has been featured on major television networks.”

The North American leg of METALLICA‘s “WorldWired” 2017 tour kicks off on May 10 in Baltimore, Maryland and will hit stadiums in 25 cities before winding down in mid-August. Support on the quartet’s first North American trek since 2009 will come mainly from AVENGED SEVENFOLD and VOLBEAT, with GOJIRA taking over for the latter group for the last six shows. 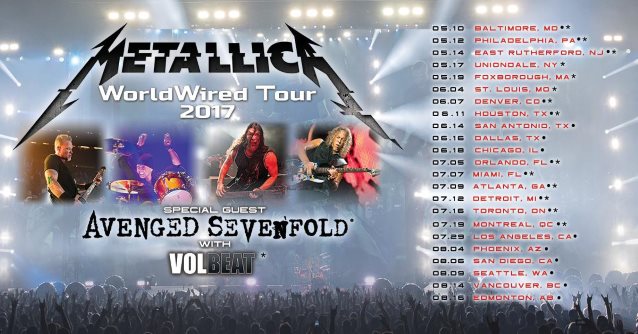