Kaaos TV conducted an interview with former AC/DC drummer Phil Rudd on April 14 at Rantasipi hotel in Vaasa, Finland. You can now watch the chat below. A few excerpts follow (transcribed by BLABBERMOUTH.NET).

On performing AC/DC songs with his solo band on the group’s current European tour:

Phil: “[Those are] the ones I like, that I feel I contributed a lot to, with just the way I played them. We don’t wanna be a covers band, so we just brought in two or three [AC/DC tracks]. Because we’re playing the Bonfest [the annual celebration of the life and music of AC/DC legend Bon Scott, who died in 1980 at the age of 33] on the 28th of April in Scotland, so we’ve got three of Bon‘s songs that we’re playing, and hopefully we’ll do them well for the fans in Scotland.”

On what he did with his time after he was ousted from AC/DC when he was sentenced to eight months of home detention by a New Zealand court in 2015 after pleading guilty to charges of threatening to kill and drug possession:

Phil: “It was more of a mind/psychological rebuild. So I had a great therapist. And being locked up was actually a good chance to get my shit sorted… I’ve got a pretty nice house in Tauranga [New Zealand], so it wasn’t too bad. And people could come and go and everything. My good friend Rupert Bird [Rudd‘s court-appointed psychiatrist], who’s my therapist as well, he was a great help to me. So I’m in really good shape. I’m very fit. Plus I had a heart attack, and now I’ve got more blood pumping, and I’ve got good stamina. And I’m playing pretty well, if I do say so myself.”

On whether he would like to be involved with AC/DC again in the future:

Phil: “I’d like to be involved with Angus [Young, AC/DC guitarist] again, maybe on the next album or something. But I still have some traveling restrictions, and I’m not sure if I can go to America or not. I’ve got some lawyers doing some work so I can go back to America, but I’m not too sure. So I have some limitations on what I can do, and I’m just making the best of my situation at the moment.”

On whether he is in contact with his former bandmates in AC/DC:

Phil: “I am. Yes, I am. I talk to Brian [Johnson, AC/DC singer], and we just talk about cars, and I talk to Cliff [Williams, AC/DC bassist], and we just talk [about] anything. It’s just old friends talk. But I’m sure Angus has got a few ideas. He did a great job on the ‘Rock Or Bust’ album. I think it’s a great album — one of the best ones we’ve done, for sure. [It was] very well produced by Brendan O’Brien, who understands guitarists. And he did a really good job. And I was pleased with my work on that as well.”

On whether he can see himself working with Axl Rose as AC/DC new singer:

The GUNS N’ ROSES leader completed nearly two dozen shows with AC/DC last year after Brian Johnson, who joined in 1980 after the death of original vocalist Bon Scott, was told he was at risk of going deaf.

Rudd, who has appeared on all but three of AC/DC‘s 18 studio albums, has just embarked on his first solo tour in support of his 2014 solo debut, “Head Job”. It was the release of that album that led indirectly to Rudd‘s arrest, with the drummer allegedly so angry at a personal assistant over the way the record was promoted that he threatened to have the man and his daughter killed.

Rudd‘s replacement in AC/DC is Chris Slade, who also did a three-year stint with the group from 1990 to 1993. 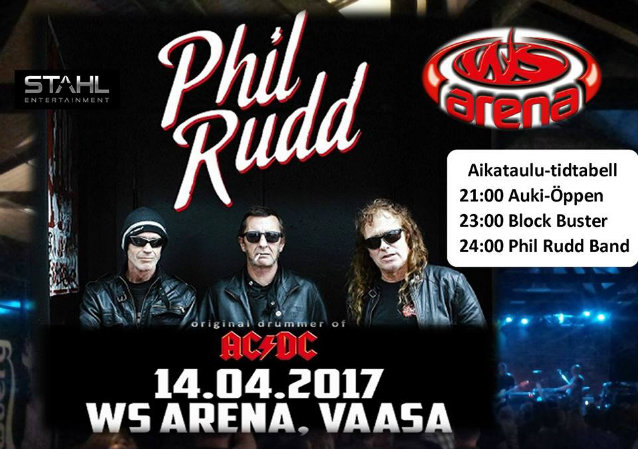