Fan-filmed video footage of QUIET RIOT‘s April 7 performance at Bowery Live in West Palm Beach, Florida can be seen below.

QUIET RIOT made its live debut with the band’s seventh lead singer, “American Idol” finalist James Durbin, on March 18 at The Cotillion in Wichita, Kansas.

Durbin, who became known as the “metal guy” on 2011’s season of “American Idol” after performing “Living After Midnight” and “Breaking The Law” with JUDAS PRIEST, joined QUIET RIOT in March after the dismissal of Seann Nicols (a.k.a. Sheldon Tarsha; formerly of ADLER’S APPETITE). Nicols was with QUIET RIOT for just a few months, but long enough to record the vocals for an early version the band’s upcoming album, “Road Rage”.

Prior to the Wichita show, Durbin — who recently collaborated with QUIET RIOT guitarist Alex Grossi on the “Maps To The Hollywood Scars” EP — explained his decision to join QUIET RIOT, saying that it was partly motivated by his desire to elevate the band’s status to levels not seen in the decade following original singer Kevin DuBrow‘s death.

“Me stepping into QUIET RIOT is me wanting to use the attention that I have and the things that I have done to highlight a band that I feel is being forgotten, or is being remembered for the wrong reasons,” he said.

“[The QUIET RIOT documentary ‘Well Now You’re Here, There’s No Way Back’ is] a great movie, it’s a great story, it’s tragic, it happens to every band. Whenever somebody loses a member, you go through this thing where you’re trying to find somebody to fill that spot, and in some cases, it’s just another guy, but in other cases, it’s your best friend or your brother. And you’ve really gotta find people that you really gel with and really work with and really understand.”

Drummer Frankie Banali revived QUIET RIOT in 2010, three years after DuBrow‘s death, along with Grossi and Wright. The group went through two vocalists — Mark Huff and Scott Vokoun — before settling on Jizzy Pearl in 2013. Pearl announced his exit from QUIET RIOT last October. 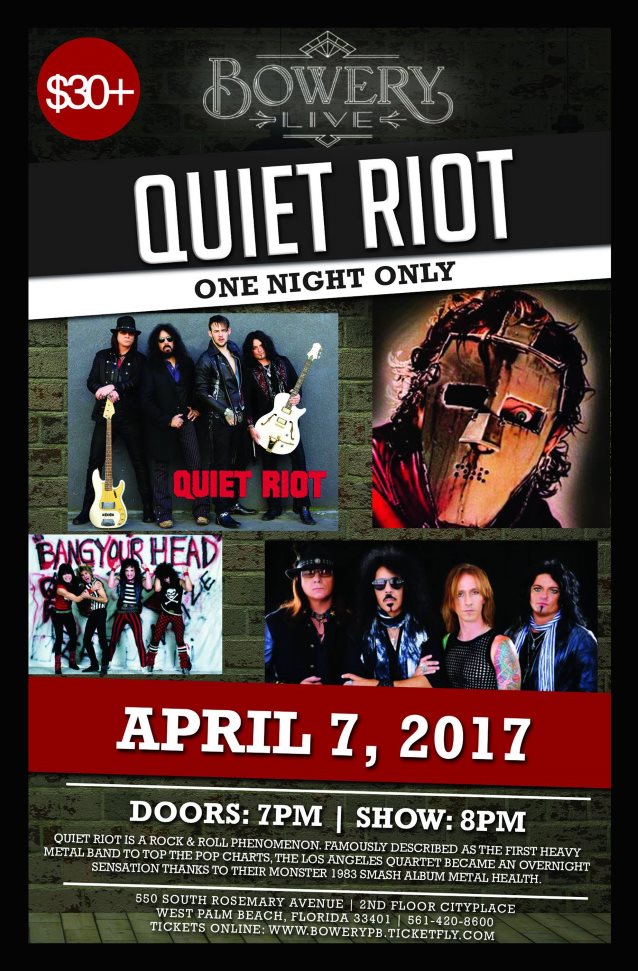