In the heady musical atmosphere of the early 1990s, HELMET‘s 1992 breakthrough album, “Meantime”, stood out for its uniquely dynamic approach. Often described as a thinking person’s heavy metal band, the New York foursome merged the influence of leader Page Hamilton‘s avant-garde background with a hard-rocking sensibility to create some of the era’s most innovative and influential music. “Meantime”‘s distinctive mix of inscrutable lyrics, bludgeoning guitar riffs and jarring stop-start rhythms scored with fans and earned respect from multiple generations of musicians.

On June 23, 2017, UMe celebrates the 25th anniversary of “Meantime”‘s original release with a special vinyl reissue of this modern classic. The anniversary edition will be available in a limited-edition colored vinyl pressing, as well as a standard black vinyl version.

Having cut his teeth playing with avant-garde guitar icon Glenn Branca and indie stalwarts BAND OF SUSANS, Page Hamilton launched HELMET in 1989, and the band released its debut album, “Strap It On”, on the independent Amphetamine Reptile label the following year. HELMET soon became the subject of an unprecedented major-label bidding war, ultimately signing with Interscope and releasing “Meantime” in June 1992.

Produced mainly by the band members, “Meantime” finds HELMET — the classically trained Hamilton on guitar and vocals plus guitarist Peter Mengede, bassist Henry Bogdan and drummer John Stanier — creating music that’s fiercely aggressive yet hypnotically precise, with such tracks as “Unsung”, “Role Model”, “Give It” and the Steve Albini-produced “In The Meantime” showcasing Hamilton‘s staccato riffs, jazz-influenced chords and ominous vocals. The New York Times called HELMET “a band that made important connections between indie-rock and metal.”

As Allmusic observed” “Arguably one of the most influential and overlooked rock records of the ’90s, ‘Meantime’ threw the rule book out the window. Led by the classically trained Page Hamilton, HELMET‘s bludgeoning riffs combined with their stop-go-stop-go minimalist attack changed the face of aggro-rock. Its importance cannot be overstated.”

Although HELMET disbanded in 1997, Hamilton revived the band in 2004, and the group has continued to tour and record.

Even while he band was absent from the spotlight, HELMET continued to exercise considerable influence on multiple generations of bands. Their songs have been covered by the likes of CHEVELLE, DEFTONES, FAITH NO MORE, PIG DESTROYER and SOULFLY, and the band inspired a 2016 HELMET tribute album titled “Meantime Redux”. HELMET has also been cited as a key influence on such bands as GODSMACK, KORN, MARILYN MANSON, MASTODON, PANTERA, QUEENS OF THE STONE AGE, SEPULTURA, SLIPKNOT, STAIND, SYSTEM OF A DOWN and TOOL.

HELMET is currently on tour in support of its latest album, “Dead To The World”, released this past October on earMUSIC. 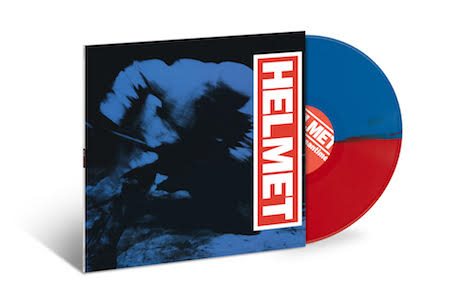