METALLICA: Watch Pro-Shot Footage Of 'Wherever I May Roam' Performance From Denver, Colorado

Professionally filmed video footage of METALLICA performing the song “Wherever I May Roam” on June 7 at the Sports Authority Field at Mile High in Denver, Colorado can be seen below.

The Rock And Roll Hall Of Fame band is touring in support of its tenth studio album, “Hardwired… To Self-Destruct”, which features the current single “Now That We’re Dead”.

The North American leg of METALLICA‘s “WorldWired” trek will hit stadiums in nineteen more cities before ending in mid-August. METALLICA drummer Lars Ulrich told Rolling Stone that the band was genuinely surprised to learn they could still play stadiums, saying, “It was like, ‘Holy fuck, people really still care about this band in ways that you stopped taking for granted literally decades ago. It was very inspiring and kind of eye-opening.”

He added: “Full stadium runs can sometimes be a little intimidating. There’s all these things to worry about like, ‘You should really try to play maybe only on the weekend,’ and, ‘Where do you play on Tuesday?’ and some of those practicalities can get a little bewildering. We just threw caution to the wind. Doing a stadium run seemed like the perfect thing on the back of how well this record has been received and all the good will that’s out there in METALLICA‘s world right now.”

The next stop on the tour is Houston, Texas on June 11.

Support on the quartet’s first North American trek since 2009 is coming mainly from AVENGED SEVENFOLD and VOLBEAT, with GOJIRA taking over for the latter group for the last six shows.

“Hardwired… To Self-Destruct” was certified platinum on April 12 by the RIAA (Recording Association Of America). The platinum certification reflects a million equivalent album units, which blends traditional album sales, tracks sold from an album and on-demand audio and video streams. 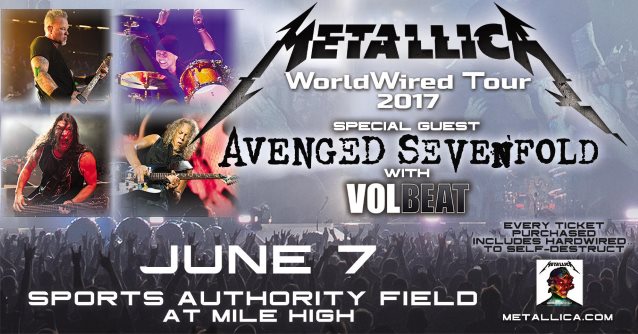