“Letting Go”, a brand new song from the Canadian metal trio CAULDRON, can be streamed below. The track is taken from the band’s new album, “New Gods”, which will be released on September 7 via The End Records (North America) and Dissonance Productions (Europe).

Says founding vocalist/bassist Jason Decay: “‘Letting Go’ is one of the first tracks that came together for the new record. We really couldn’t deny the melody found in this song and I think somehow it still sounds very CAULDRON.”

For the follow-up to their critically acclaimed 2016 album “In Ruin”, Jason Decay (lead vocals, bass), Ian Chains (guitar) and Myles Deck (drums), along with producer Chris Stringer, honed and recorded the songs at Union Sound in Toronto.

“We have always prioritized songwriting above anything else,” says Decay. “For me personally, I have always felt more confident writing than as a ‘musician,’ and for the first time I think we have found the production that best suits our songs.”

“I am very proud of the songwriting, performances and production on this one, and it is definitely the most confident I have been in a finished album of ours. It is dark, it’s heavy and it has a very melodic sense of AOR. Most importantly, it still sounds very CAULDRON. I’m pretty sure people who were into ‘In Ruin’ will like this one just as much, if not more.”

In conjunction with the release of “New Gods”, CAULDRON will play a handful of U.S. shows in September with support from BARROW WIGHT. The band has also confirmed a special record-release show in its hometown of Toronto, set for September 15 at Junction City Music Hall. 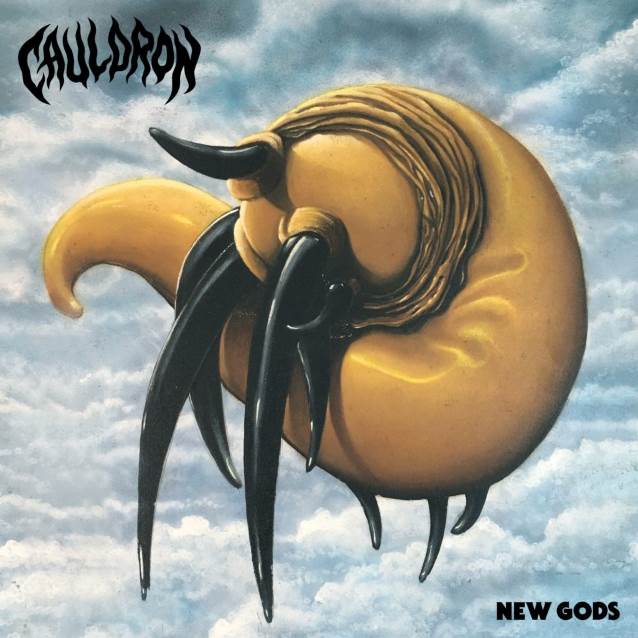