CRYPTOPSY To Release 'The Book Of Suffering – Tome II' In October; 'Sire Of Sin' Video Available

Canadian extreme metal veterans CRYPTOPSY are something of an enigma. Having gotten their start way back in ’92, only a few short years after the birth of death metal, the band, nearly thirty years later, continues to out-brutalize bands half its age. That is some serious intestinal fortitude.

If you had any doubt, well, let’s put that to rest right now with the visually stunning video for the brand new single “Sire Of Sin”. The song is culled from the forthcoming EP, “The Book Of Suffering – Tome II”.

CRYPTOPSY comments: “We knew that the video had to be as chaotic as the song. To accomplish this, we strived to remove all full-band performance shots and replace them with extreme close-ups on individual members. In order to match the frantic pace of the music, we challenged Chris Kells (director, editor, producer) to make a myriad of seamless edits between multiple angled and minimally lit shots. We must say that we are blown away with what he accomplished.”

Much like 2015’s critically acclaimed “The Book Of Suffering – Tome I”, “Tome II” promises an inhuman musical journey that once again defies the universal laws of gravity, rhythm, vibration, polarity, and chaos. Almost unbelievably, “Tome II” amps up the chaos, delivering an even more ferocious- and superior-sounding experience, thanks in part to the knob-twiddling magic of longtime guitarist Christian Donaldson.

Pre-orders for “The Book Of Suffering – Tome II” are available now via CRYPTOPSY‘s Bandcamp page as well as on iTunes. Upon pre-order, fans will receive a digital single of “Sire Of Sin”.

“The Book Of Suffering – Tome II” will be released on October 26. The cover art was created by Remy C. from Headsplit Designs and can be seen below. The effort was produced, mixed and mastered by Donaldson at The Grid studio in Montreal, Quebec, Canada. 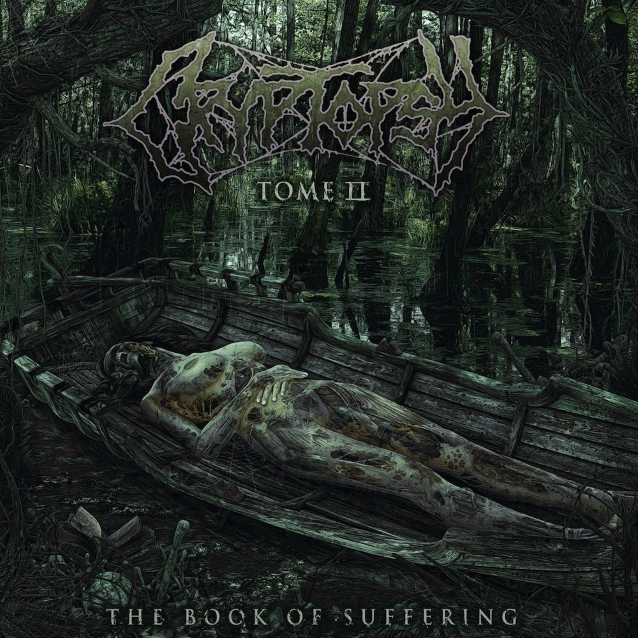