STEEL PANTHER Drummer Defends 'Pussy Melter' Distortion Guitar Pedal: We 'Will Not Be Told What To Say Or Do'

STEEL PANTHER drummer Stix Zadinia has defended his group against criticism over the guitar effect preset called “Pussy Melter”, saying that he and his bandmates “will not be told what to say or do.”

This past July, TC Electronic stopped advertising the “Pussy Melter” after a number of musicians blasted the Danish audio company for using sexist language to title the TonePrint.

BRAIDS‘ Raphaelle Standell-Preston and JAPANESE BREAKFAST‘s Michelle Zauner are among the female musicians who objected to the name and description of the effect, and a petition to remove the product was started by musician Jessica Fennelly.

Following the outcry, the company discontinued the effect, designed by STEEL PANTHER guitarist Satchel. TC Electronic also issued a statement, saying: “We recognize that the material was inappropriate… We sincerely apologize.”

Last month, STEEL PANTHER announced that it was bringing the “Pussy Melter” moniker back for a new standalone guitar pedal, which they are selling themselves. It comes with knobs labeled “Dirty,” “Sizzle,” “Booty” and “Load,” and is being marketed to “guitarists of all genders,” according to a press release.

Zadinia, whose real name is Darren Leader, told Inc. in a new interview that he understands why TC Electronic decided to pull the pedal.

“First, keep in mind TC Electronic is a global audio equipment company,” he explained. “They didn’t want the heat. They had a conversation with Satchel and said — and this is their right — that they are not in the politics game and don’t want to take edgy stances. I get that. There’s absolutely nothing wrong with that. Again, that’s completely their right. Just like it’s our right to turn the toneprint into an actual pedal and develop and sell it ourselves.

“I’m really proud of how quickly we were able to pull everything together,” he continued. “We commissioned a custom pedal maker to develop the hardware. Our friend Brent Skaff did the graphics; it’s beautiful. Then we took pre-orders, the response was great [one fan wrote, ‘I’m not even a guitar player and I’ve ordered one’], and now we’re going into production. In the meantime, we sent a prototype to the Fear The Riff expo in New York and the response was awesome. Respected guitar players love it. Angel Vivaldi loves it. Lots of people are digging it. It couldn’t be cooler.”

According to Zadinia, STEEL PANTHER “would never have thought about getting into the guitar pedal business had the controversy never happened.” As a result, “Now we have a second pedal in the works,” he said. “The goal, as with the first pedal, is to make it a top-quality pedal, to make it something guitar players love… We’re not in this as a gimmick. We may have a little fun with the branding, and with the overall package [laughs], but ultimately, we want to make awesome pedals that guitarists will love to use.”

The drummer went on to say that the controversy surrounding the “Pussy Melter” pedal speaks to the larger issue of how the reign of political correctness has led to social punishment of some expressions of opinion.

“When you bring attention to something, you better be prepared for people to take a different stance,” he said. “The last thing STEEL PANTHER will do is back down from something we totally believe in. We may sing about sex, drugs, and rock and roll and wear awesome spandex and have super bitchin’ hair [laughs], but we are also not afraid to take a stance.

“Within the first weeks, the [‘Pussy Melter’] has already become a significant source of revenue. But that’s because our hearts were in the right place. Satchel designed the tone with a great manufacturer. It was done with care. Really, it was done with love. He only wanted to do it if it sounded great. So while some might claim we simply took advantage of the opportunity the attention brought, the whole thing stems from the fact that we, as STEEL PANTHER, will not be told what to say or do…as long what we say or do is within our rights.

“If you don’t like our pedal, that’s cool. Don’t buy it. But don’t try to police the world because you don’t like something. Not to sound all high and mighty, but this is about a great guitar pedal… and also about freedom of expression. We would never try to tell anyone what to say or do, as long as it’s within your rights to say or do it.” 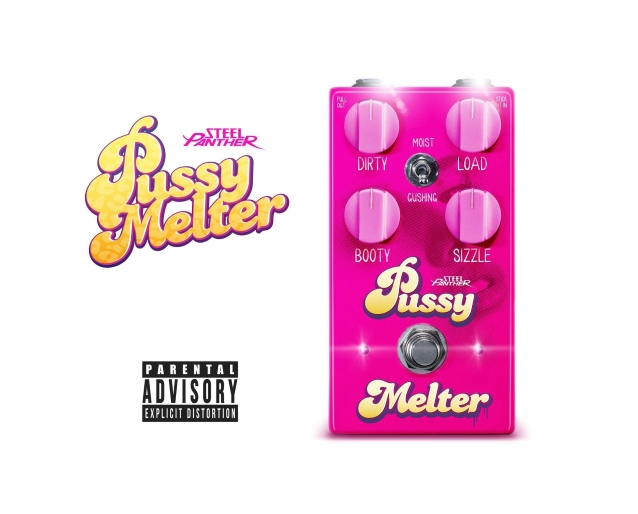 STEEL PANTHER Drummer Defends 'Pussy Melter' Distortion Guitar Pedal: We 'Will Not Be Told What To Say Or Do'
Tagged on: HRRL
tom lats September 1, 2018September 1, 2018 Rock News No Comments