ACE FREHLEY On His 1978 Solo Debut: 'I Realized I Could Make Better Music Away From' KISS 'Than I Could With Them'

During a “live conversation” at Hollywood’s Musicians Institute on September 25, former KISS guitarist Ace Frehley discussed his 1978 debut solo album, which was released simultaneously alongside solo recordings by his three bandmates.

“I just wanted to make the best record possible,” Frehley said. “I had a revelation after all four albums came out and mine became the most successful – pretty much there’s this voice in my head going, ‘Ace, you know you’re a lot more creative away from those guys than you are with them.’ That was kind of the beginning of the end for me, because I realized that I could make a lot better music away from Paul [Stanley] and Gene [Simmons] and Peter [Criss] than I could with them. But I was also drinking and doing a lot of drugs, so that could have affected my decision-making.”

The album featured South African-born drummer Anton Fig, who would later play with the “World’s Most Dangerous Band” on the long-running NBC talk show “Late Night With David Letterman” and with the CBS Orchestra on the Letterman-hosted “Late Show”. “When I met Anton, he was very green,” Ace recalled. “He hadn’t played with a lot of famous people. A friend of mine said to me, ‘I know this guy Anton Fig,’ because I was looking for a drummer for the [1978 solo] record. He told me about Anton and said, ‘This guy’s great.’ Then about three days later, Eddie Kramer called me, my producer, and he said, ‘There’s this guy I’ve heard about called Anton Fig and I want you to audition him.’ When you get that from two different people you know and trust… I called him up and said, ‘Let’s get together and jam.’ It was just like magic, and it’s been magic. Every time I’ve work with Anton, we have this telepathy. I don’t even have to tell him what to do — I just look at him, and he does a drum fill. It’s so weird. We just work so well [together]. We’re, like, connected mentally.”

Fig would go on to “ghost-perform” all but one song on KISS‘s 1979 album “Dynasty” and the band’s entire 1980 album “Unmasked”. According to Frehley, he was even briefly a member of the group. “Paul and Gene came to me and said, ‘We’re going to fire Peter,'” Frehley said. “I said, ‘If it’s going to happen, it’s going to happen. I have no control. I’m outvoted anyway, two to one.’ They said, ‘We need to get a drummer.’ The first thing out of my mouth was, ‘What about Anton Fig?’ I go, ‘Listen to my solo album — he’s an amazing drummer.’ They said, ‘Why don’t you give him a call?’

“I called Anton that evening and said, ‘Hi, Anton. I’ve got some good news — you’re in KISS,” Frehley continued. “The next day, Paul and Gene changed their mind, but for one day, Anton was the drummer of KISS. I really felt bad calling him back and telling him, ‘Paul and Gene decided [against it].’ I think it was because me and Anton were really good friends and we liked to party together, and they probably thought it wasn’t a good idea. Me and Peter used to party together, but we still did our job. I still did the shows. I was 99 percent on. I had a tour manager who’d tell me he used to work with THE [ROLLING] STONES, and he said Keith Richards was so stoned, they had to carry him onstage and put him a chair, but the minute they put the guitar in his hand, he was brilliant. I was never that loaded where I couldn’t walk on the stage, but I always performed and I always came through.”

Fig later joined Ace in FREHLEY’S COMET and appears on Frehley‘s new solo album, “Spaceman”, which will be released via eOne on October 19. 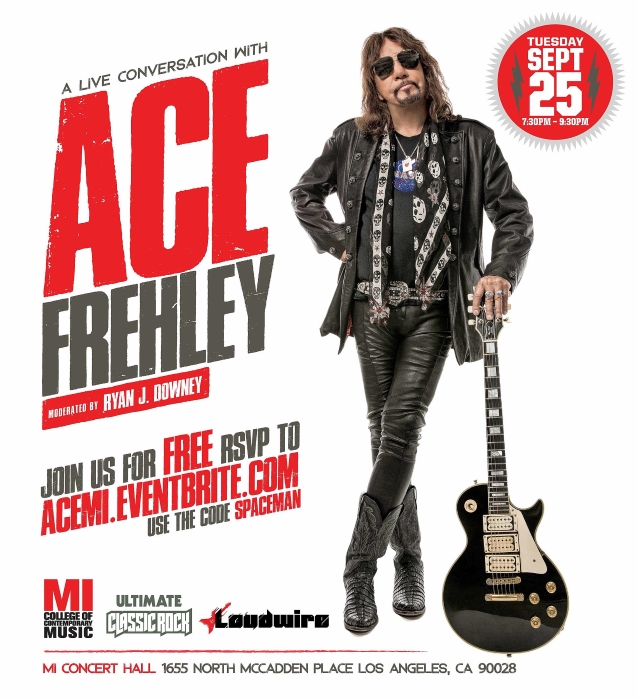 ACE FREHLEY On His 1978 Solo Debut: 'I Realized I Could Make Better Music Away From' KISS 'Than I Could With Them'
Tagged on: HRRL
tom lats October 1, 2018October 1, 2018 Rock News No Comments