AUGUST BURNS RED, MEMPHIS MAY FIRE, ISSUES Members To Perform At Memorial Concert For WE CAME AS ROMANS Singer

Kyle Pavone, the charismatic and talented singer of WE CAME AS ROMANS, tragically and unexpectedly passed away in August. The band will honor his memory with the “Promise Me Tribute Show” on Sunday, October 28 at The Fillmore in Detroit, Michigan. The concert will benefit the Kyle Pavone Foundation, which serves members of the music community with counseling services for mental health issues and substance abuse, among others.

A number of very special guests are confirmed to perform both with WE CAME AS ROMANS and individually at this event. The guest performers include many musicians and singers that Pavone and WE CAME AS ROMANS have toured with throughout their careers.

Guests include ISSUES‘ Tyler Carter; AUGUST BURNS RED‘s Jake Luhrs; MEMPHIS MAY FIRE‘s Matty Mullins; I PREVAIL‘s Eric Vanlerberghe, members of BORN OF OSIRIS, FOR TODAY, and Nick Sampson. Additionally, some of Pavone‘s favorite electronic artists and DJs will participate in the show, which will feature over-the-top production, dynamic lighting and video, and special effects! Ultimately, the lineup for “Promise Me” is a “can’t miss” celebration of Kyle Pavone‘s life, career, and memory.

Pavone died of an accidental drug overdose. His bandmates said in a statement last month that they would honor the singer by going ahead with their previously announced U.S. tour.

The mission of the Kyle Pavone Foundation is “a promise to serve and advocate for the musician community in their time of greatest need, providing hope and a means to carry on.”

“The only reason we’re still doing this is we want to honor Kyle‘s legacy, want to honor his memory, we want to keep playing these songs,” Stephens added. “This was his dream. Being on this stage was his favorite place to be — but not just any stage, this stage in Detroit.”

TMZ originally reported that Kyle was transported to a Michigan hospital on August 19 and pronounced dead six days later, on August 25.

WE CAME AS ROMANS‘ fifth album, “Cold Like War”, was released in October 2017 through SharpTone Records.

Pavone joined WE CAME AS ROMANS in 2008 as vocalist and keyboardist and appeared on all five of the band’s albums. Their 2013 LP, “Tracing Back Roots”, peaked at No. 8 on the Billboard 200 chart. 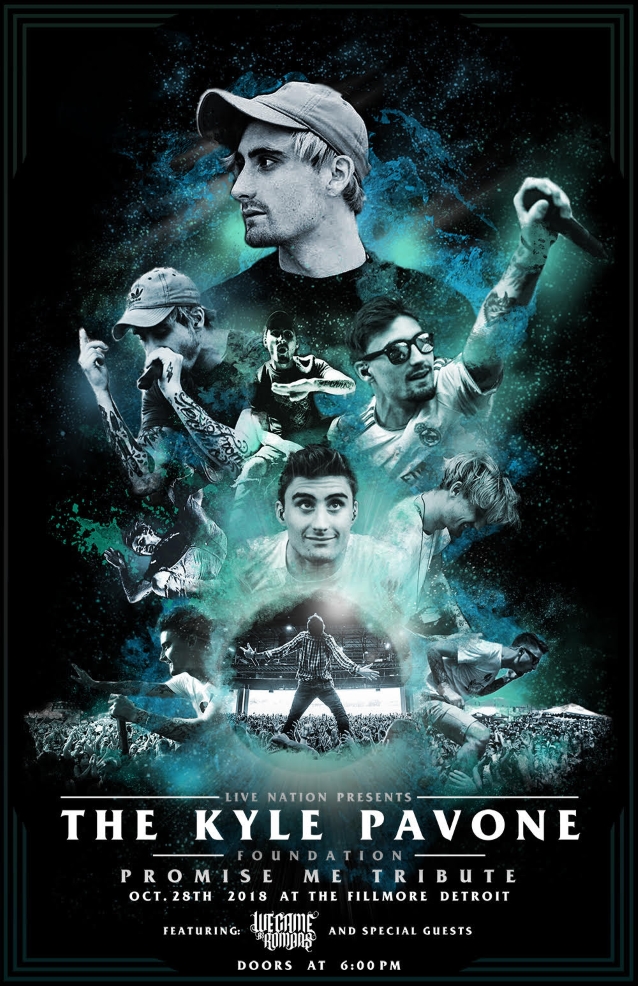