Fan-filmed video footage of SLASH FEATURING MYLES KENNEDY AND THE CONSPIRATORS performing on October 1 at Wellmont Theater in Montclair, New Jersey can be seen below.

SLASH FEATURING MYLES KENNEDY AND THE CONSPIRATORS‘ new album, “Living The Dream”, was released on September 21 via Slash‘s own label Snakepit Records, in partnership with Roadrunner Records.

Slash told LA Weekly about the making of “Living The Dream”: “I would say that, going in to make this record, we were eager to get back together, because we had been apart for obviously a year and a half. Maybe that plays into it. We also did it at this little studio that I put together, where it was ‘our place.’ We could just go in there and we didn’t have to block out time or any of that kind of shit. It was our room to do what we wanted with, so there was a lot of comfort there. It was tiny but fun. We were just having a good time.”

Regarding playing more intimate venues with THE CONSPIRATORS after performing in some of the biggest arenas, stadiums and festivals in the world with GUNS N’ ROSES, Slash told LA Weekly: “I’m looking forward to playing in intimate spots, because I’ve been playing stadiums for literally two years now. It’s nice to change it up. Normally, I would say that I like to play smaller venues as opposed to stadiums, but this last GUNS tour has proved to me that you can make a stadium into a much more personal event, if the people really fucking dig you. It’s an interesting thing. We did stadiums back in the day, but the crowds this time around were really off the hook, across the board, from every country. But that said, I’m looking forward to going in and doing these little theaters with THE CONSPIRATORS because it’s just going to be fucking fun. It’s very raw and everybody’s on a small stage — it’s just primal.” 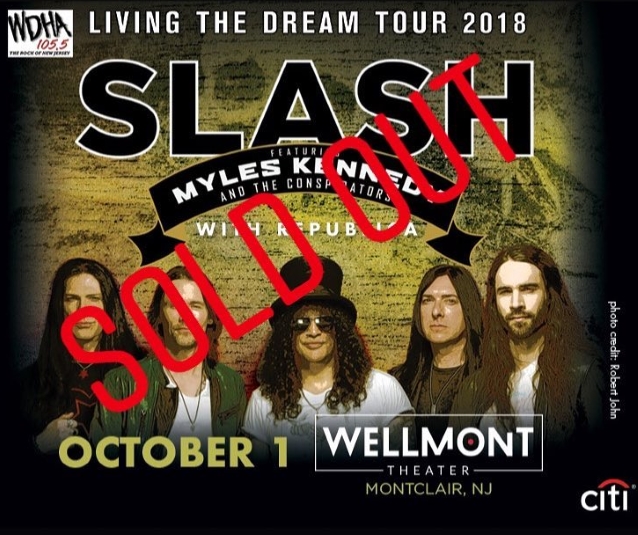