DEF LEPPARD has released a video recap of the 2018 leg of the band’s “Hysteria & More” tour of U.K. and Ireland, celebrating 31 years since the release of its seminal “Hysteria” album, which was played in its entirety in track order. The clip, which was created by Lee Ford and Ben McFarlane, can be seen below.

Essential listening for fans across the board, “Hysteria” indisputably ranks as one of the most decorated and revered rock albums of all time. As the group’s second consecutive RIAA Diamond-certified record (ten million sales in the U.S.), it would go on to sell over thirty million copies worldwide and twelve million in the U.S. Moreover, the record staked a spot in the U.S. Top 40 for ninety-six weeks matched only by “Born In The U.S.A.” Rolling Stone touted it on the prestigious “500 Greatest Albums of All Time” list, and a poll in Q placed it among the “100 Greatest Albums of All Time”. Dominating multiple charts, it captured No. 1 on the Billboard Top 200 and U.K. album charts, bolstered by immortal Top-5 anthems such as “Pour Some Sugar On Me”, “Animal”, “Love Bites”, “Hysteria”, “Rocket” and “Armageddon It”.

In a 2017 interview with Forbes, DEF LEPPARD singer Joe Elliott stated about “Hysteria”: “Having an album like ‘Hysteria’ is kind of like having a tattoo — you make that decision and we lived this album pretty much every day of our lives since then. There are twelve songs on the album. Off the top of my head, three, four, maybe five of them we played every show since because they’re just so important in the live environment. We don’t buy into this school of, ‘I’m not playing the hits.’ Some of the songs off the A list are mostly off ‘Hysteria’ ’cause it’s an important statement by the band at this time and luckily for us it remains one. That’s the great thing about it — it’s not one of these records that sold really well, then fell off the planet. It stayed alive, the way ‘Hotel California’ or ‘Rumours’ or ‘Led Zeppelin 4’ did. It’s still, I wouldn’t say an active record, but actively part of our audience’s life as much as ours. They buy the shirts for it. It’s the go-to record for both of us.” 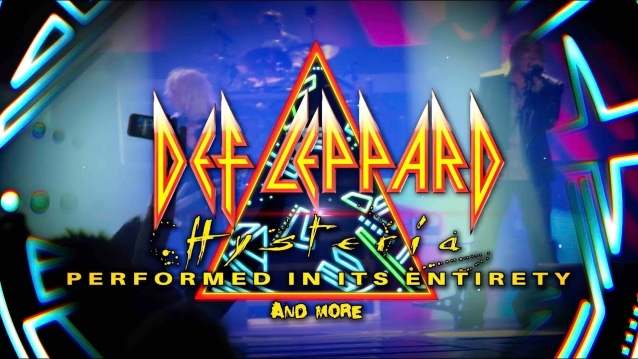