Charlotte Wessels says she expects DELAIN to continue with the “epic” sound found on the “Hunter’s Moon” EP when she and her bandmates start putting together material for their next full-length album. The EP is considered a stop-gap before the band heads into the studio to record the follow-up to 2016’s “Moonbathers”.

In a recent interview with Australia’s Heavy magazine (audio below), Wessels was asked about playing live with Hietala during 2017’s “Danse Macabre” tour, where the NIGHTWISH bassist/vocalist joined DELAIN as a special guest. “It was fantastic,” the singer said. “I think that for him, it was fun because he was doing a tour, yet he didn’t have to do half as much as he usually has to do on a tour. I think, for him, it was a more relaxed version of touring, I hope. We had a lot of fun. It was really nice having him onboard and having him on the team. He really got along well with everyone in the band. It was a lot of fun having him. Then, of course, it was really special having him onstage for multiple songs because over the years, we have had him perform one or two tracks on special occasions or when we toured with NIGHTWISH, he was always kind enough to quickly jump onstage with us and then go back and prepare for his own show. He’s been onstage with us multiple times, but never before for so many songs as with this one.”

While considered a symphonic metal band, DELAIN‘s sound has often veered more toward the pop side of things versus the bombastic and cinematic sound its contemporaries in NIGHTWISH and EPICA favor. However, the “Hunter’s Moon” EP finds the band heading in a more “epic” direction, as indicated by first single “Masters Of Destiny”. Wessels was asked whether this will be the direction DELAIN plots as it starts to plan for its next studio album. “I think so,” she said. “‘Hunter’s Moon’ and ‘Masters Of Destiny’ were initially some of the songs we were working on for the new album. I think people can definitely expect us to kind of carry on in that way. For us, it’s kind of unusual — the song structure is different. We usually have — we’ve called our songs ‘pop songs in a metal coat’ before. I personally really like really clearly structured [songs] and this one is kind of odd in that way it has an intro that doesn’t return and the composition is very elaborate. For us, it was kind of a gamble, like ‘Are people going to like it? Are they going to expect it from us because they’re not used to it?’ But we had such a strong feeling about the track, so we were, like, ‘No, this definitely needs to be the single.’ We’ve got a lot of signals from people that ‘Hunter’s Moon’ should be the single since it’s single-like. We felt strongly that no, we got a better feeling with ‘Masters Of Destiny’. I think the fact everyone responded so positively to it also kind of gives us the encouragement to keep walking that road.”

“Hunter’s Moon” will be released February 22 via Napalm Records. The effort is the final release in a trilogy, and follows on from DELAIN‘s EP “Lunar Prelude” and the full-length album “Moonbathers”.

Listen to “On The Hunt With DELAIN” on Spreaker. 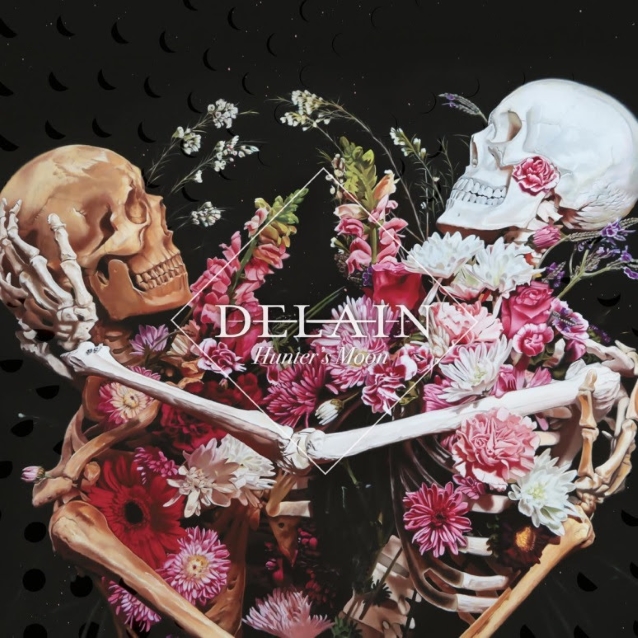