MEGADETH bassist David Ellefson has announced the first dates for his summer 2019 “Basstory – More Life With Deth” tour. The shows will feature a question-and-answer session/discussion with co-author and partner Thom Hazaert about Ellefson‘s upcoming memoir, “More Life With Deth”, and a full live-band set including songs from the companion album “Sleeping Giants”.

Dates are as follows:

Performing with Ellefson will be Hazaert, who handles vocals on the newly recorded tracks from “Sleeping Giants”, along with “Basstory” vets, DEAD BY WEDNESDAY guitarist Dave Sharpe and drummer Opus Lawrence, and HATCHET guitarist Clayton Cagle.

Support in various markets will be provided by EMP Label Group and Combat artists, including ARCHER NATION, LAST CRACK, BLEED (a.k.a. CRAWL), GREEN DEATH and more.

Says Ellefson: “When we got the unfortunate news that the Ozzy [Osbourne] tour was postponed, we thought we’d make the best of the downtime and take one more lap around the track to get up close and personal with the fans, and go talk about the book, and play some of these ‘Sleeping Giants’ songs live.

“‘Basstory’ started out more in the vein of a ‘clinic’ and has evolved into a full-on live band show, and now with some new material to play, and revisiting some of my past material from other projects on ‘Sleeping Giants’, I think it’s going to be that much more exciting. That’s the great thing about ‘Basstory’ — it’s always a different show. And it’s always fun to get back into the clubs and get intimate with the fans in a way that’s not possible in a giant arena, and that’s really what ‘Basstory’ is all about.”

A limited VIP dinner experience is available for each show on the tour at this location.

Featuring cover art by Melody Myers (ALTITUDES AND ATTITUDE, MARC RIZZO, ESCAPE THE FATE), “Sleeping Giants” will be a retrospective featuring several new tracks recorded by Ellefson and Hazaert, plus a collection of demos and unreleased material, from F5 and David‘s other projects, including the unreleased demo “If You Were God”, featuring John Bush (ANTHRAX, ARMORED SAINT), plus several unreleased demos featuring HOUSE OF LORDS/GIUFFRIA vocalist David Glen Eisley. The CD version will also include a second bonus disc, featuring a compilation of EMP and Combat artists. 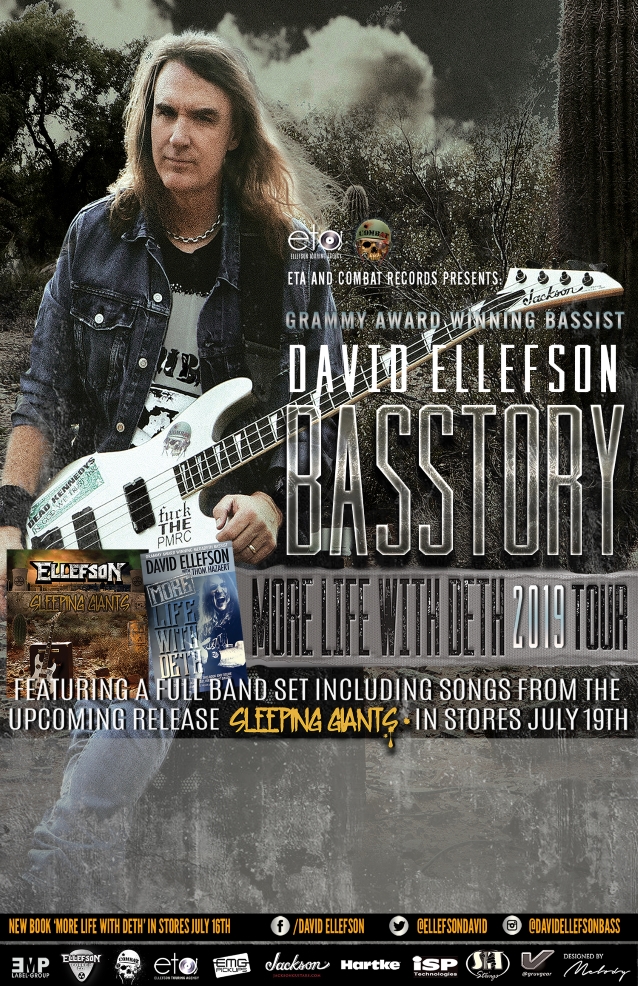