CANNIBAL CORPSE frontman George “Corpsegrinder” Fisher says that the band is “100 percent” behind its lead guitarist Patrick “Pat” O’Brien who is facing a litany of legal issues following his recent arrest.

O’Brien, who has been a member of CANNIBAL CORPSE for more than two decades, was arrested on December 10, 2018 for burglary and assaulting a police officer while his Florida home was in flames.

O’Brien was released from Hillsborough County jail on December 14, 2018 after posting a $50,000 surety bond. Several days earlier, at a hearing, a judge told the 54-year-old musician, clad in an anti-suicide vest with his hands and ankles chained together, that he would first have to pass a drug test before he would be allowed to post bail and leave jail.

During an appearance on a recent episode of “The Jasta Show”, the podcast hosted by HATEBREED‘s Jamey Jasta, Fisher expressed his shock over O’Brien‘s arrest, saying: “I don’t wanna speculate about what could have happened that night, but it could have been way worse — for him.

“When people were seeing [TV reports about] it — I think on the Tampa news, they were pretty good with him,” he continued. “They just said he was one of the best guitar players in death metal in America, and in the world, and he’s highly respected. And they didn’t really trash him at all. And they showed him on TV.”

According to Fisher, most of the CANNIBAL fans have been very supportive of Pat while he is dealing with his ordeal. “In the metal world, I think in general, 95 percent [of the people], everyone was, like, ‘Get well soon,'” he said. “I didn’t spend too much time reading stuff online, because that’s when you get people who just wanna say nasty stuff just to be nasty.”

Fisher went on to say that he and his bandmates are looking forward to O’Brien‘s return to CANNIBAL CORPSE.

“We love him,” he said. “We want him back. But when I saw him in the court with the vest, dude, I cried. Because we just got home from tour… We wish the best for him, and we’re just waiting to see [what happens]. He’s got a road ahead of him still with legal issues, and that’s out of our hands. We support him 100 percent; we’re behind him 100 percent.” 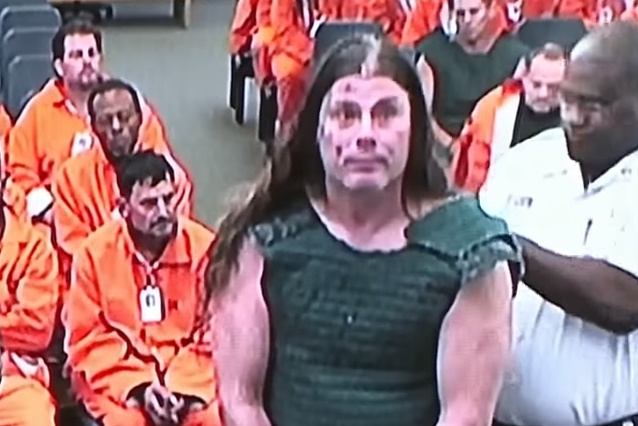