LES BINKS’ PRIESTHOOD, the band featuring former JUDAS PRIEST drummer Les Binks, will celebrate the 40th anniversary of PRIEST‘s classic live album “Unleashed In The East” by performing the LP live at select shows in the U.K. and the rest of Europe.

Binks played drums on PRIEST‘s “Stained Class”, “Hell Bent For Leather” (released as “Killing Machine” in the United Kingdom) and “Unleashed In The East” albums.

In an interview with K.K. Downing’s Steel Mill web site, Binks stated about his decision to start LES BINKS’ PRIESTHOOD: “I’ve been working with these musicians individually in various settings over the past few years in live performances and often had audiences ask for PRIEST songs because of my association with band. So I decided to put my own band together specifically to play the material from my era with JUDAS PRIEST and, naturally, I called upon their services to help me achieve that.”

Les continued: “I wanted to focus on the material from four albums, beginning with ‘Sin After Sin’. Although I didn’t play on it, I was recruited to tour and perform the songs live to promote the record in the U.K., U.S.A. and Japan. My first studio album, ‘Stained Class’, which saw me contribute to the writing with ‘Beyond The Realms Of Death’, my second studio album, ‘Killing Machine’, re-titled ‘Hell Bent For Leather’ in the States, and ‘Unleashed In The East’, the live-in-Japan album. Initially, it was just for a one-off gig at the ‘Legends Of Rock’ event held in Great Yarmouth each March, but we seemed to have created a lot of interest in the band and have been encouraged to play more dates, festivals, etc.”

Binks admitted that he “had to sit down” with all four PRIEST albums he played on before he got into rehearsals with PRIESTHOOD to “decide which songs to do and re-learn the drum parts all over again. Some of them have weird odd timings, like the mid-sections in ‘Sinner’, then there’s the epic ‘Genocide’ and ‘Victim Of Changes’,” he said. “Took a while, but eventually it all came back and the show was ready to rock again.”

He added: “I deliberately didn’t want to perform material I wasn’t involved with beyond my period in the band as there are many tribute bands doing that and I didn’t want to be labelled that way, but, of course, Eddie, who runs the ‘Legends Of Rock’ event, specifically requested some later stuff, so to keep the peace, we threw in ‘Breaking The Law’, ‘Living After Midnight’ and ‘You’ve Got Another Thing Comin’.”

According to Les, it was “easy” to choose the musicians for the PRIESTHOOD band “as I knew these guys were more than capable of doing the songs justice. I am very lucky to have these guys onboard,” he said. “They’re doing a fantastic job.”

Ex-JUDAS PRIEST guitarist K.K. Downing reconnected with Binks in 2017 for the first time in nearly four decades. Downing later described the experience of meeting his former bandmate as “great” and called Les “one of the greatest drummers in the world and a good friend and a great guy.”

After the release of “Unleashed In The East”, Binks exited PRIEST and was replaced by ex-TRAPEZE member Dave Holland. Les later told Downing‘s official web site that the making of the live album “caused a rift between me and [PRIEST‘s] manager and ultimately led to my decision to leave the band. I just didn’t see the point in continuing to work with a band whose manager didn’t want me to receive any payment for that live album. A completely ludicrous scenario. It’s a classic heavy metal live album which I believe eventually went platinum and he didn’t want me to receive a penny for it. Crazy fucker!!! But that’s what happens if a band allows someone like that to manage them — they lose members. So exit drummer number four.” 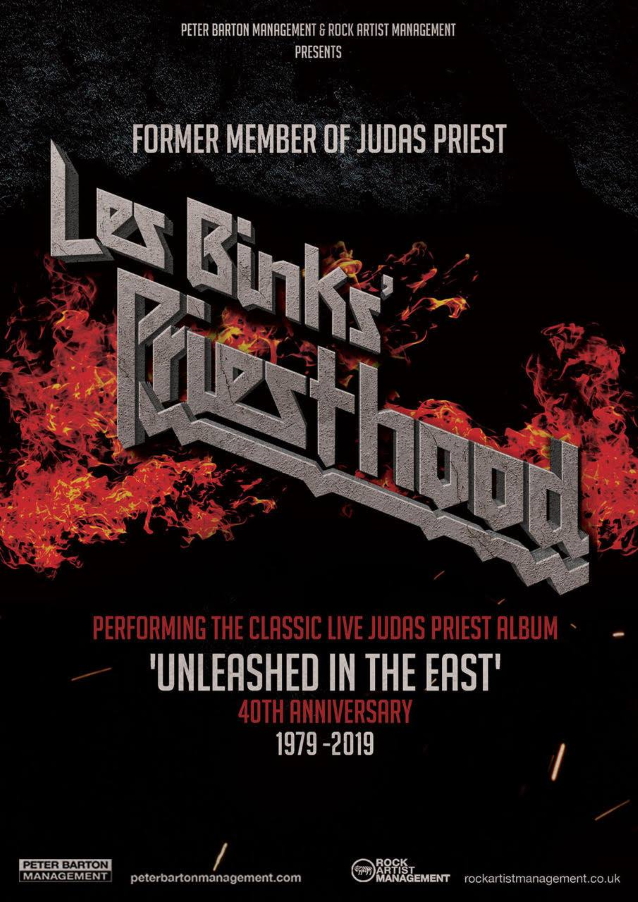