ROB HALFORD Doesn't Rule Out K.K. DOWNING's Return To JUDAS PRIEST: 'What Will Happen Will Happen'

Rob Halford hasn’t ruled out the return of K.K. Downing to JUDAS PRIEST, saying that “what will happen will happen.”

The guitarist, who left PRIEST in 2011 amid claims of band conflict, shoddy management and declining quality of performance, was replaced by Richie Faulkner, nearly three decades his junior.

As part of a question-and-answer session during his appearance at Alice Cooper‘s Solid Rock Teen Center in Phoenix, Arizona on Friday (August 23), Halford was asked if there is a chance that Downing will rejoin PRIEST at some point in the not-too-distant future. “It is such an emotionally charged question,” the PRIEST singer replied, according to Sleaze Roxx. “It’s like, ‘Why isn’t Ace [Frehley] back in KISS?’ I think what will happen will happen. I know that’s kind of a nebulous response. I like to be as honest as I possibly can. I think being honest is a pretty good way to live your life, and I don’t want to send mixed messages.”

Bassist Ian Hill recently said that there were no plans for PRIEST to invite Downing to return to the band.

“Richie took over from Ken,” Hill told Riff Magazine. “He’s done an absolutely tremendous job, he really has. And he’s made Ken‘s parts his own now. He’s got his own angle on the lead breaks. Ken‘s part’s been taken, and there’s no plans to have Ken back, really. Hey, listen, never say never. But at the moment, we’re going along quite well without Ken, so it could stay like that, I think, at least for the foreseeable future.”

Last fall, Downing dismissed as a “load of bollocks” Hill‘s explanation for why K.K. wasn’t invited to rejoin the band after fellow guitarist Glenn Tipton‘s Parkinson’s diagnosis was made public.

“We were like brothers; we went to infant school together and secondary school together, and we lived our career together,” Downing said. “But I’m not totally happy about what’s being said. Ian seems to be [saying] things like, ‘None of the fans are missing K.K.,’ and, ‘Richie has brought a new energy to the band.’ And I’m going, ‘Ian, dude, on that last tour, I was the energy. I slowed down because people weren’t keeping up with me.’… So I’m thinking, Ian, get a grip with yourself, mate. You’ve just replaced the energy with some energy. Fine — well, great. But that’s not moving forward, Ian.”

Tipton was diagnosed with Parkinson’s disease five years ago — after being stricken by the condition at least half a decade earlier — but announced in February 2018 he was going to sit out touring activities in support of PRIEST‘s latest album, “Firepower”.

Last summer, Downing revealed that he sent two resignation letters to his bandmates when he decided to quit JUDAS PRIEST. The first was described as “a graceful exit note, implying a smooth retirement from music,” while the second was “angrier, laying out all of his frustrations with specific parties.”

Downing later said that he believed the second letter was “a key reason” he wasn’t invited to rejoin PRIEST after Tipton‘s decision to retire from touring.

Judas Priest- about the music ❤️

A cool project we did with Alice Cooper's Solid Rock and Rob Halford of Judas Priest – Friday August 23, 2019 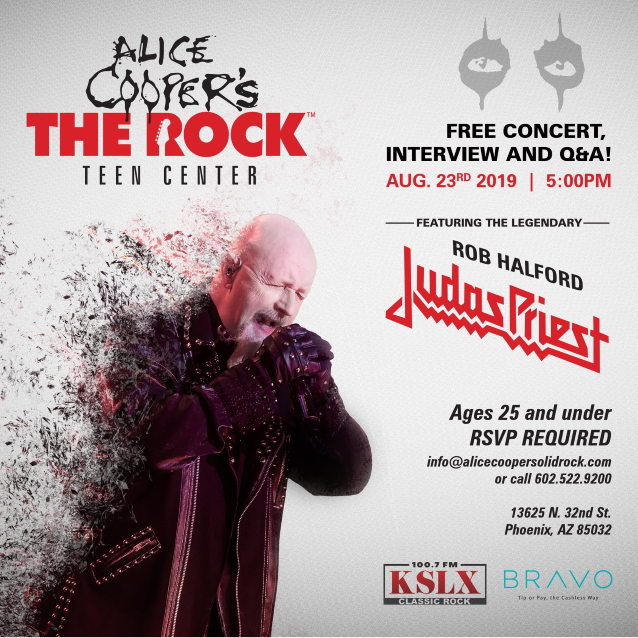