WISHBONE ASH To Release 'Coat Of Arms' Album In February

In the annals of rock music, there have been few bands with a lasting stylistic influence who continue to be active to this day and are celebrated at their shows not only for their past accomplishments but who continue to impress their fans with new albums, new songs and fresh ideas at regular intervals. WISHBONE ASH certainly counts among this rare species. Almost precisely 50 years ago this month, the group led by guitarist/vocalist Andy Powell first caught attention with the release of its debut album, “Wishbone Ash” (1970). Two years later, they went on to write music history with their third release, “Argus”, and since then WISHBONE ASH has brought out more than two dozen outstanding studio and live recordings, among them classics such as “Live Dates” (1973), “There’s The Rub” (1974) and “New England” (1976), as well as more recent gems such as “The Power Of Eternity” (2007) and “Elegant Stealth” (2011). Their upcoming release, “Coat Of Arms”, forges an arc to all these offerings, featuring WISHBONE ASH‘s characteristic twin lead guitar parts, their haunting melodies and diverse stylistic facets, while at the same time imbuing the scene with a breath of fresh air.

“Coat Of Arms” sounds stylistically diverse and technically accomplished, yet the new album is typical of WISHBONE ASH‘s traditional strengths — a balancing act that is a challenge to Andy Powell every time.

“Following the countless songs that we have written throughout the history of WISHBONE ASH, my own expectations are extremely high,” Andy says. “On the one hand, as a composer, you try not to repeat yourself in your creative output but to come up with new ideas all the time. On the other, you want to remain faithful to your style. Good songs need an inner conviction and the right inspiration. We had both when we started working on ‘Coat Of Arms’.

“You’d be right in describing the current lineup as the best in the history of WISHBONE ASH. We all love our lives as musicians, the direct contact with our fans, travelling, the shows, our songs. It’s that commitment by everybody involved that you hear in every single note on ‘Coat Of Arms’.”

“Coat Of Arms” will be released through SPV/Steamhammer on February 28, 2020 as CD DigiPak, 2LP version (including a bonus track), download and stream.

January 10, 2020 will see the arrival of the lead single “We Stand As One”, which Powell proudly describes as a “real heavy rock anthem featuring wonderful guitars, in the true spirit of WISHBONE ASH classics such as ‘The Warrior’.” 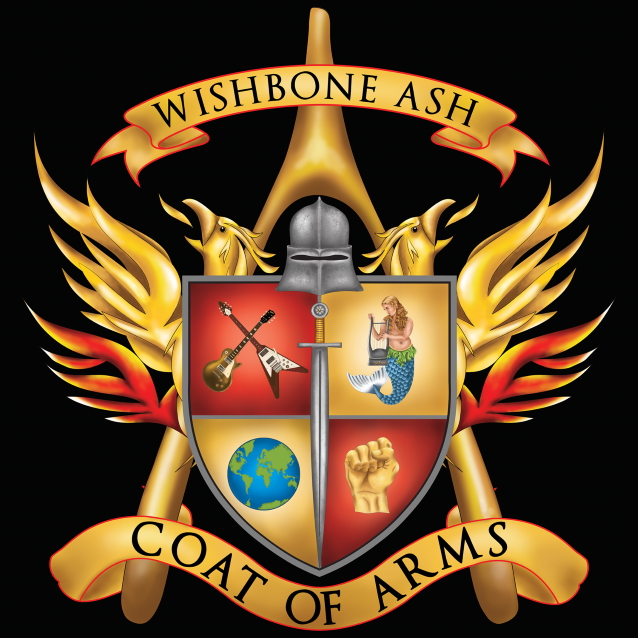