Doom Metal Legends THE OBSESSED Are Back!

THE OBSESSED, one of the early BLACK SABBATH-influenced doom metal bands on the American continent, has reformed and is working on a new studio album.

THE OBSESSED frontman Scott “Wino” Weinrich, who has also played with SAINT VITUS, SPIRIT CARAVAN, THE HIDDEN HAND and SHRINEBUILDER, announced THE OBSESSED‘s return on social media, explaining in a statement: “All over the world I’ve listened to friends tell me, ‘We want you to bring back THE OBSESSED,’ so I have decided to resurrect THE OBSESSED.

“I have been waiting for the right combination of ability, attitude and personality to accomplish this goal.

“From this day forward, THE OBSESSED is myself, [bassist] Dave Sherman [SPIRIT CARAVAN] and [drummer] Brian Costantino [SPIRIT CARAVAN] who have proven to be dedicated, fearless and unwavering in their love of this music.

“We are diligently writing and working on getting into the studio to record a new OBSESSED album and hope to have this out as soon as possible.”

“The Church Within” lineup of THE OBSESSED — featuring Wino, Greg Rogers (GOATSNAKE, SONIC MEDUSA) on drums and Guy Pinhas (ACID KING, GOATSNAKE, BEAVER) on bass — reunited to perform at Roadburn festival on April 14, 2012.The band also played at Hellfest that year, and took part in a short European tour. In 2013, THE OBSESSED performed another string of reunion dates with Reid Raley (RWAKE, NACHTMYSTIUM) taking Guy Pinhas‘s place. They also played at Maryland Deathfest, Scion Rockfest and Power Of The Riff.

There is no debating the impact that Wino has had (and continues to have) on the stoner scene, and THE OBSESSED is the band with which he developed his signature doom songwriting and guitar sound. Formed in Maryland in 1976 as WARHORSE, they soon changed their name to THE OBSESSED. The original four-man lineup was pared down to a power trio and they spent several years playing shows and honing their sound, culminating in the release of the “Sodden Jackal” seven-inch single in1983. The band then went on hiatus as Wino joined SAINT VITUS for a few years in the late ’80s. They reformed in 1990 with Wino, joined by a rhythm section of Greg Rogers and Scott Reeder. The new lineup released “Lunar Womb” before Reeder left to join KYUSS. At that point Guy Pinhas joined as the bass player and the band was signed to Columbia Records and went on to release “The Church Within”.

“The Church Within” was Wino‘s most critically hailed album. Despite being co-released by Hellhound Records and the major label Columbia Records, the music-buying masses were not ready to embrace doom in 1994 and instead fixated on buying records by rehashed pop-punk bands. Several factors led to “The Church Within” becoming THE OBSESSED‘s last full-length album. Despite not becoming a top-seller, the album remains hugely influential. 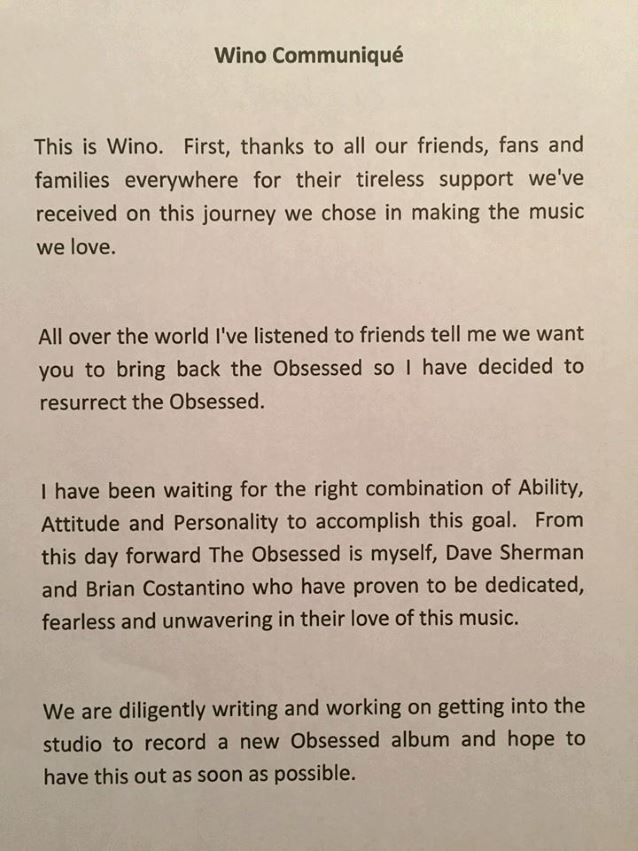