Video footage of former MARILYN MANSON and current ROB ZOMBIE guitarist John 5 and his solo band THE CREATURES — Ian Ross on bass and Rodger Carter on drums — performing on March 8 at 12th and Porter in Nashville, Tennesee can be seen below. The hour-long concert features musical styles ranging from heavy metal to bluegrass, ending with a montage of iconic guitar riffs.

John 5‘s “Behind The Nut Love” tour continues in the Northeast, concluding in Londonderry, New Hampshire on March 20.

John has had an illustrious career collaborating with chart topping artists such as LYNYRD SKYNYRD, Ricky Martin, and Rod Stewart. John has performed on critically acclaimed world tours with Marilyn Manson and Rob Zombie. Later, John ventured into the world of film score composing for Rob Zombie‘s “The Lords Of Salem”. In 2004 he branched out into a successful solo career and has since released eight studio albums.

John recently released a video for the song “Behind The Nut Love”. Originally recorded for his 2005 album “Songs For Sanity”, this new version of the track was recorded with John 5‘s band, THE CREATURES (Ian Ross and Rodger Carter), and is available anywhere digital music is sold. The clip was directed by Matt Zane and shows John 5 sitting in a high-backed chair with a rare 1950 Fender Broadcaster, amazingly playing behind the nut to emulate the sound of a lap-steel guitar.

John 5‘s new solo album, “Guitars, T!ts, And Monsters”, will be released later in the year. 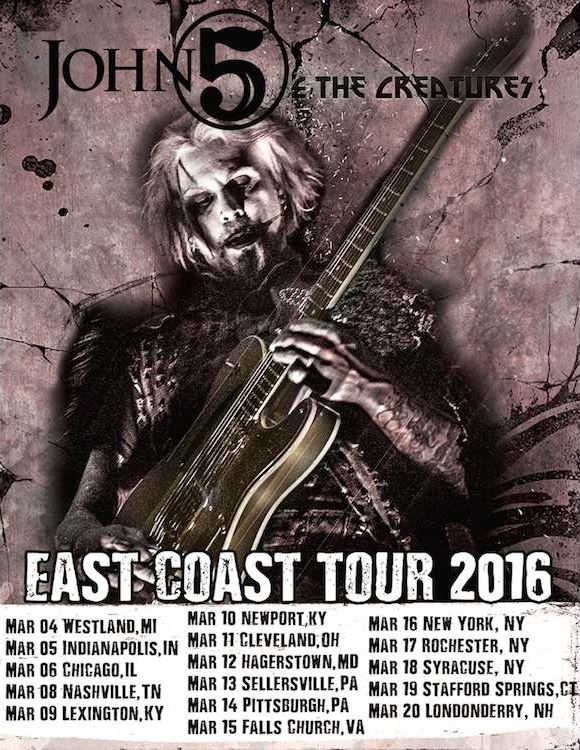