Steve Smith, renowned drummer of JOURNEY, will debut his art collection, “The Fabric Of Rhythm”, a series of original prints on canvas, for the first time on the East Coast with an in-person appearance. Join Steve for the opening reception at Art On A Gallery in New York City on Thursday, March 17 as he will be discussing the pieces in his collection with the public. This is a free event.

Smith grew up in the Boston area and started playing drums at the age of 9 in 1963. He studied music at the Berklee College of Music from 1972 to 1976 with Alan Dawson and Gary Chaffee as his private instructors. Over the past 35 years, he has toured and recorded with some of the biggest names in jazz and rock — appearing on recordings that have sold over 100 million copies worldwide — including JOURNEY, Bryan Adams, Mariah Carey, Zucchero and Jean-Luc Ponty.

“Rhythm On Canvas” is a new medium in art — a movement led by the world’s greatest drummers, started at SceneFour, a visual art team based in downtown Los Angeles. Through their signature collaborative art approach, they work with notable visionaries outside of the fine art world to collectively create original art projects. At the conclusion of the creation process with featured collaborative guest, an original art collection is born and released worldwide.

The collection will be on display March 10 through April 7. 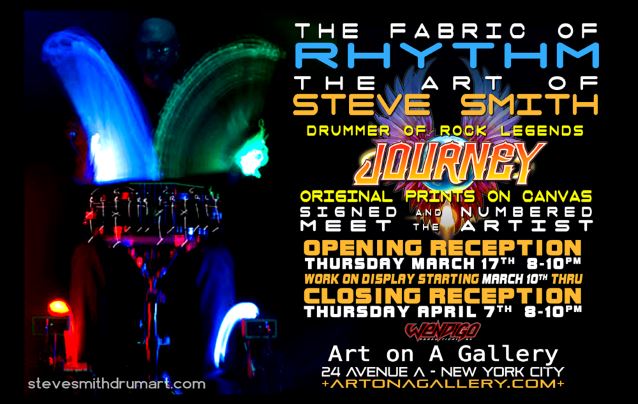