LITA FORD Is Bringing Back The '80s With 'Time Capsule'

’80s hard rock queen Lita Ford will release a new album, “Time Capsule”, on April 15 via SPV/Steamhammer. The very special and unusual recording turns back the clock to a time when honest, down-to-earth rock music was still handmade and recorded without digital tricks and contraptions.

Speaking to Guitar World magazine, Lita stated about how the idea for “Time Capsule” came about: “There were 15 analog tapes I had in the Caribbean house [where Lita lived while she was married to former NITRO singer Jim Gillette] that I had to go back and get during my divorce. I drug them though the Caribbean dirt and on to a boat and took them back to L.A. I remember we had to bake them because they were so old and had been in that air for so long. I was afraid to put them on the reel because I thought they would flake and fall apart. So we baked them and transferred them over to digital — and it worked!”

Asked what made “Time Capsule” so special, Lita said: “It has such a magical vibe to it. We didn’t change one note on anything on this album. All we did was remix. It was so fun and when we originally recorded it, all of the musicians were in their prime: Billy Sheehan; Gene Simmons and Bruce Kulick; Robin Zander and Rick Nielsen of CHEAP TRICK; Dave Navarro is on mandolin; Rodger Carter‘s on drums. Even Jeff Scott Soto and I sing a duet together that’s just awesome. The album is also a gift to the fans, because I know they miss the eighties. There are people who are too young and didn’t get to live through the eighties, and then there are other people who really miss it. So there’s a little piece of the eighties in this time capsule, and I’m bringing it back!”

“Time Capsule” contains ten songs plus an intro and will be available as a digipak as well as an LP version and download. It’s Ford‘s gift to fans who love the ’80s, when thrilling vocal performances, raunchy riffs, and loud, growling guitars were as essential as oxygen.

“Lita Ford – Living Like A Runaway: A Memoir” came out on February 23 via Dey Street Books (formerly It Books), an imprint of HarperCollins Publishers. In this 272-page hardcover book, which was originally expected in 2014, the former lead guitarist of THE RUNAWAYS opens up about the ’70s and ’80s music scene, and her extraordinary life and career. 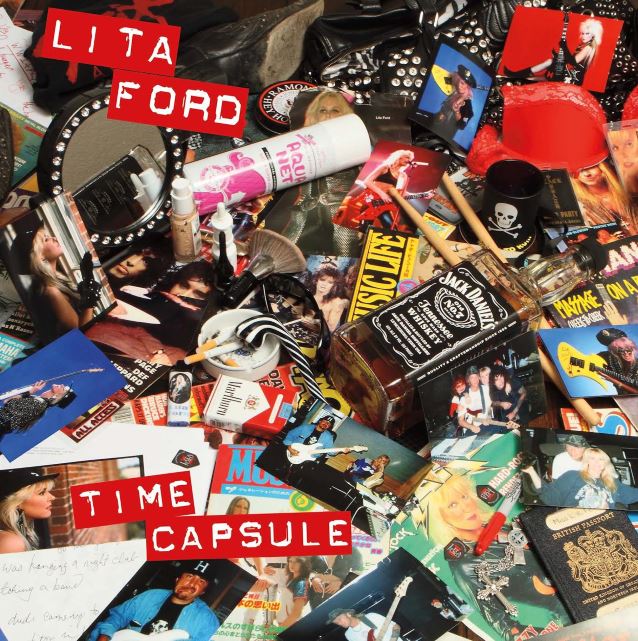