Tom Compagnoni of The HuffPost Australia conducted an interview with vocalist Simone Simons of Dutch symphonic metallers EPICA when the band played in Sydney on March 19. You can now watch the chat at HuffingtonPost.com.au. A couple of excerpts follow (transcribed by BLABBERMOUTH.NET).

On what it was like touring while she was still pregnant with her son in 2013:

Simone: “Touring being pregnant was, for me, quite easy. I had a great pregnancy. I was really healthy, [and] the baby was doing well. The only thing is my belly was gigantic. A lot of people thought I was already full term when I was only six months pregnant. So I had quite a belly, and moving on stage didn’t go the way I wanted it to. I had to ask my manager to zip up my dress and put my shoes on. I felt slightly uncomfortable. But in a way it was fun having seven people rocking on the stage. It was heavy, I was tired, but I enjoyed it even more. The whole package is so special — being in a band and becoming a mother.”

On combining motherhood and being in a touring band:

Simone: “Combining motherhood and career is a challenge, especially ’cause my career involves a lot of traveling and being away from home. I made, until now, the conscious choice to leave my son at home. Only if I play in the vicinity I can take him with me, or if I’m in the Netherlands I’ve done that. But I like to keep him in the safe bubble, the surrounding that he knows. My husband [KAMELOT keyboardist Oliver Palotai] and I have a deal — when the other one’s on tour, the other… One of us has to be home. Now we have a family as well. He goes to daycare, so he’s got his friends there and I like him to have that stability. I did have him with me in the studio when I was recording the vocals for ‘The Quantum Enigma’. He was two months old and I was still breastfeeding and I didn’t wanna quit; I wanted to prolong it as much as possible. And that was very heavy, because I was not sleeping at night, and for a vocalist, sleep is the most primal thing you need; when you wanna maintain your voice, you need to sleep. I was not sleeping, quickly having breakfast while breastfeeding, recording vocals and breastfeeding, eating at the same time, and then doing it all over again for two weeks. And I was pretty much the walking-dead mom; I was extremely exhausted. I have so much respect for working moms that go to work three months after having a baby. But when you’re self-employed, you can manage yourself a bit. But being responsible for a whole group of people also makes the pressure higher. And being away from your child simply sucks.”

On being a role model for young women around the world:

Simone: “Whenever I’m being told that I’m a role model, I always feel very humbled and can’t quite place myself in that position, because I have admired women when I was younger, and seeing myself in that way is weird, ’cause I’m a very sober-minded Dutch girl. I’m the example of a high-school dropout, not studying and then playing in a band which is successful due to a combination of factors. It’s not only working your ass off; it’s also luck. You have to have talent, persistence [and] you have to made the job. And I guess I’m very lucky that the path was kind of laid out for me and I felt confident enough to walk on it.”

EPICA‘s next album is tentatively due in September. 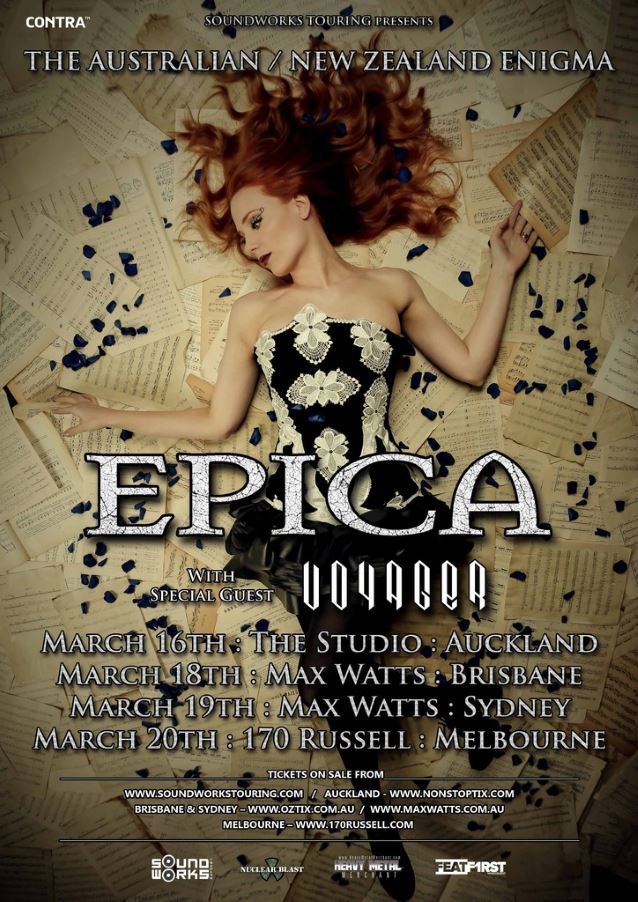