Rock band PIERCE THE VEIL has released “Circles”, a brand new song from its next album, “Misadventures”, due out May 13 on Fearless Records. Just yesterday, “Circles” was named the “Hottest Record In The World” on BBC Radio 1‘s Annie Mac show, and in less than 24 hours, the track has soared past 100,000 YouTube hits. In addition, it’s trending worldwide on Facebook.

“Circles” goes to U.S. rock and alternative radio today, and you can check out the song below.

“Circles” was inspired by last fall’s Paris terrorist attacks and is a hypothesized story about two friends at the the EAGLES OF DEATH METAL show and how they tried to save each other as the onslaught was taking place.

“Misadventures” is the follow up to the band’s 2012 breakthrough release, “Collide With The Sky”, that debuted at No. 12 on The Billboard 200 albums chart, held the No. 1 spot on the Rock, Hard Rock, and Modern Rock/Alternative Albums charts, has sold nearly 350,000 copies, and earned the band a gold single for the track “King For A Day”.

For “Misadventures”, the band — Vic Fuentes (vocals, guitar), Tony Perry (guitar), Jaime Preciado (bass) and Mike Fuentes (drums) — worked again with Dan Korneff who co-produced “Collide” and recorded at his Long Island studio Sonic Debris on and off between summer 2014 and summer 2015. “It was exciting to do another record with Dan,” said Vic. “We had gotten to know him really well on ‘Collide’, so there wasn’t that initial period where you’re trying to get to know each other. We just dove in and started to make music right away.”

Initial plans were for “Misadventures” to be released earlier, but touring commitments and the band’s conscious decision to take their time to make the album the very best it could be, both musically and lyrically, set a different course. Explained Vic, “We went into this record wanting to top the last one, which we try to do with every record, and we kept setting the bar higher and higher.”

Vic‘s search for inspiration took him to a number of places to write the lyrics — New York, San Diego, Los Angeles, the Southern California mountain resort of Big Bear, Santa Barbara and Seattle. “I wanted every song to have real meaning, and thought that in spending time in different places, I’d find new inspirations — that’s exactly what happened,” he said.

The eleven songs on “Misadventures” find the band dealing with a variety of topics including self-worth and an individual’s ability to shine, the dream of leaving everything behind while you run away with the one you truly love, the challenge of outrunning betrayal to an undefined relationship.

The track listing for “Misadventures” is as follows:

PIERCE THE VEIL will launch its “Misadventures” tour with a special sixteen-date trek played in intimate venues, a treat for both the band and its fans who last saw PTV headline amphitheatres on the 2015 Warped Tour. On this leg only, the band will play “Misadventures” in its entirety. 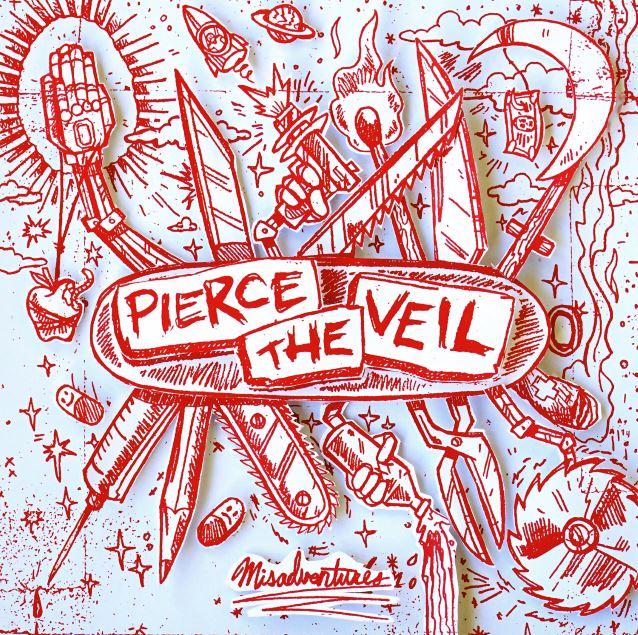