Jason Bonham says that the reunited BLACK COUNTRY COMMUNION will get together in January to begin work on a new album, to be released later next year.

During a May 2 appearance on the SiriusXM satellite radio show “Eddie Trunk Live”, Bonham spoke about how the decision to resurrect BLACK COUNTRY COMMUNION came about. He said: “Joe sent out a message… Hopefully I’m not talking out of turn here… He just said, ‘You know what? I can’t believe it’s been six years since we did the first [BLACK COUNTRY COMMUNION album].’ He goes, ‘I feel that we could really give it all and make another amazing album. Anybody interested?’ And that was literally [it].”

The drummer admitted that he “did wait until everyone had responded” before he replied. He explained: “I didn’t wanna be the first one. And I just said, ‘Hey, you know what? Yeah. Why not?'”

Jason said that he is looking forward to getting into a studio with his BLACK COUNTRY COMMUNION bandmates and putting together another album that will recapture the vibe of the band’s self-titled debut and 2012’s “2”.

“It was a great time when we did the first album — I remember the excitement — and the second album,” he said. “I loved how quickly [they came together]. We don’t do any really pre-arranging. It’s literally eight days of recording and pretty much writing all in the same time. So every day we’d be creating, hopefully, one or two songs.”

While there is no set timeline for the release of BLACK COUNTRY COMMUNION‘s next album, Jason is excited at the prospect of focusing on the creative process without allowing the business side to interfere.

“At the moment, there’s no plans of anything other than, ‘Would you be interested in doing it?’ We all went, ‘Yeah.’ And, ‘How is your schedule for January?'” he said. “So, yeah, it’s an exciting thing. I spoke to Kevin Shirley for a while about it, and he said it would be very similar to how we [did] it [on the first couple of albums] — basically create everything on the spur of the moment. Which is kind of a weird way… I’ve always liked to be able to go in a little bit more prepared, but I think now I know the way process is with them. It’s a little bit easier.”

Jason said that there are no plans to alter the songwriting formula that worked so well on BLACK COUNTRY COMMUNION‘s first two efforts. He explained: “I said, ‘Let’s just get in a room and see what happens.’ I think it could be a great thing if we can capture some of the magic that we had on the first two albums when it was still really exciting. I think we’re on to a winner. How it goes on from there, I don’t know. I’ve kind of said to myself and said to them, ‘Let’s not stop it before we get there by talking business and talking when and where and tours and whatever.’ I said, ‘Let’s go in and see what happens before we do any of that. Let’s not stop that process.’ ‘Cause that causes… It’s happened so many times; I can think of one particular band I’ve been in. Once the business side and all the politics and the press and everything get involved, it can actually stop them.”

The war of words between Hughes and Bonamassa goes back to September 2012, when Hughes began telling journalists that Bonamassa‘s solo touring schedule was preventing BLACK COUNTRY COMMUNION from touring and fulfilling its potential. He stated that if the situation didn’t change, BLACK COUNTRY COMMUNION‘s third album, “Afterglow”, could be the group’s last recording project.

“I was the only member of the band — in three albums and one live DVD — that spoke to the press, and not just on the phone, in person in Europe,” Hughes explained to rock journalist Mitch Lafon in a recent interview. “And the guy that does the talking is the guy that’s gonna get comments on. All I was trying to do was just hope that BCC would never break up. And, unfortunately, it did, and we had to move on with it. But as I listen to the music now, I listen to how incredible not just the songs are, but the way we played, the production, Joe‘s and my voice together, the enthusiasm, the emotion… all that stuff really brings it back home to me — how wonderful that band is. I say ‘is.'”

He continued: “BLACK COUNTRY COMMUNION will be the only band… will be the last band I play in. After that band, I did CALIFORNIA BREED, which was really a great record; it’s just a difficult [band] to tour with.

“BLACK COUNTRY COMMUNION… You can’t better it for classic rock music; it’s so damn good. And you need to know that we’re all friends, and long may that remain.”

Speaking about the press feud between him and Bonamassa over BLACK COUNTRY COMMUNION‘s split in 2012, Hughes said: “Joe and I, man to man, never, ever fell out — never had a bad word for each other. The problem with BLACK COUNTRY was that we wanted to continue, and Joe has an amazing solo career — a truly amazing… He works his fucking ass off. Us three wanted to play more, but Joe told us, kind of going into it, ‘BLACK COUNTRY COMMUNION is like another thing. I’m a solo artist.’ Simply because the albums were so… We thought they were great, and we thought we should play some shows. We all thought, genuinely, that Joe would wanna play more, and it didn’t happen. And we had to walk away from [it]. Like I said, the band broke up, and then, three months later, Joe‘s at my 60th-birthday party.”

According to Hughes, replacing Bonamassa and carrying on with BLACK COUNTRY COMMUNION was never an option. “I don’t think Joe would have minded it, but I minded it,” he said. “So Glenn Hughes came up with the name; big deal.

“To be honest, if they [BLACK COUNTRY COMMUNION] were to replace me, I would have been hurt, ’cause I created it. And Joe is, I know, really proud of his work in BCC. It’s a hard to pill to swallow that he didn’t want to tour any more after ‘Afterglow’, but we had to get over it. And I only remember the great stuff, the great music; we had a lot of fun together.”

He added: “There’s nothing [that’s] gonna stop Joe from doing what he’s doing with his solo career, because he’s having a great career, and I think it’s great that he’s doing well.”

BLACK COUNTRY COMMUNION‘s third album, “Afterglow”, sold 8,500 copies in the United States in its first week of release to debut at position No. 48 on The Billboard 200 chart. 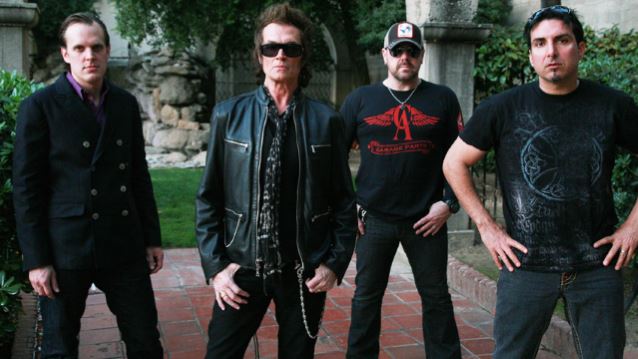