EXODUS, OBITUARY And PRONG To Join Forces For 'Battle Of The Bays' European Tour

Commented EXODUS singer Steve “Zetro” Souza: “Myself and the rest of EXODUS are absolutely excited about going out on tour with OBITUARY, PRONG and KING PARROT. What a heavy fucking show! Both OBITUARY and PRONG are solid, legendary bands that have solidified themselves in our genre, and KING PARROT have us all turning our heads on what to expect from heavy metal in the future. We can’t wait to see you all in the pit on such an epic, heavy tour! Look out Europe you’ve been warned!”

“Battle Of The Bays” tour dates:

EXODUS‘s latest album, “Blood In Blood Out”, was the band’s first album since the departure of their lead singer of nine years, Rob Dukes, and the return of Souza, who previously fronted EXODUS from 1986 to 1993 and from 2002 to 2004.

OBITUARY‘s ninth studio album, “Inked In Blood”, sold around 5,200 copies in the United States in its first week of release to debut at position No. 75 on The Billboard 200 chart.

The band’s first full-length CD in over five years, “Inked In Blood” was recorded by OBITUARY in April 2014 at the group’s own RedNeck Studio in Gibsonton, Florida. 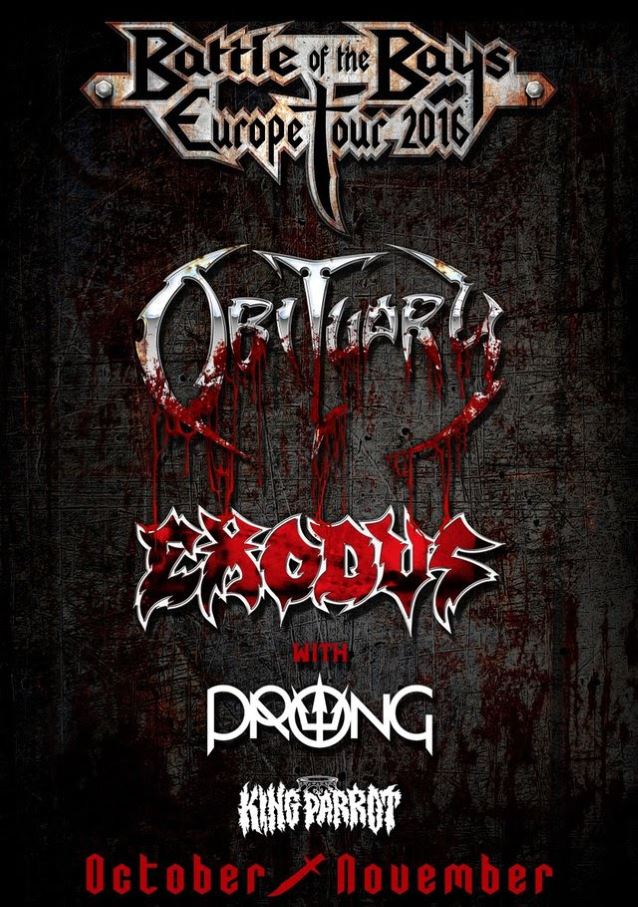