The first “Metal Meltdown” concert series event kicked off at The Joint at the world famous Hard Rock Casino in Las Vegas on May 30, 2015. Legendary, selling rockers TWISTED SISTER performed an explosive 90-minute concert of their biggest hits spanning their 40-year career. The show was dedicated to the honor of TWISTED SISTER‘s iconic drummer A.J. Pero, whose tragic, sudden death just two months prior to the filming of this event shocked the music world. The band announced that not only were all the remaining concerts being performed in 2015 dedicated to the memory of A.J. Pero, but that 2016 would mark the 40th and final year of the band’s legendary live performances. They recruited renowned drummer and friend of A.J. Pero, Mike Portnoy (THE WINERY DOGS, DREAM THEATER, AVENGED SEVENFOLD) to take the reins, and his very first TWISTED SISTER appearance was captured by the “Metal Meltdown” camera crew.

TWISTED SISTER fans will now get to witness that special concert produced by the award-winning production company Rock Fuel Media in association with Loud & Proud Records. Directed by Brian Lockwood (BON JOVI, METALLICA, MÖTLEY CRÜE), “Metal Meltdown – Featuring Twisted Sister Live At The Hard Rock Casino – Las Vegas” features that complete concert, as well as “Rockshow”, a bonus documentary that takes fans through the band’s 40-year ride from local club outcasts to world domination with exclusive interviews, archive footage from the ’80s, photo gallery. It was mixed in 5.1 Surround Sound. Set for release July 22, the retail package includes both Blu-ray and DVD formats as well as an audio CD.

A performance clip of the song “You Can’t Stop Rock ‘N’ Roll”, taken from “Metal Meltdown – Featuring Twisted Sister Live At The Hard Rock Casino – Las Vegas” can be seen below.

As TWISTED SISTER guitarist Jay Jay French explains: “The decision to continue performing all the summer shows in 2015, not to mention the concert that this performance celebrates, was in jeopardy over the days immediately following A.J.‘s sudden death. We needed time to re-group and re-focus. Everyone was great. All the promoters of the huge European summer festivals that we were set to headline and Barry, the producer of this concert, said, ‘We understand. You all (meaning the band) have to do what makes you comfortable. Whatever the band decides has to be honored and respected.’

“In the end, I believe we did what A.J. would have wanted us to do and Mike Portnoy was a very big part of that decision in both an emotional and artistic way. This performance captured herein just two months after A.J.‘s death really was about our way to help memorialize the great A.J. Pero. The front four (Dee, Eddie, Mark and I) have had no one but A.J. behind us since 1982. This concert has A.J.‘s influence permeating through our bloodstream in ways that I will never forget and when we cut to A.J.‘s drum solo on the rear projection screen, We were all emotionally overwhelmed. Not since our reunion for New York Steel in 2001 (to honor and raise money for the families of the NYC police and fire department who died on 9/11) have I been moved to tears.”

Award-winning producer Barry Summers of Rock Fuel Media commented: “TWISTED SISTER was the first live club band I ever saw in 1979 at Emmett’s Inn in New Jersey, and they literally blew my mind. We actually revisited Emmett’s and filmed a scene for the ‘Rockshow’ documentary. It has been a real dream come true to produce this amazing concert film for such an iconic and influential band. The tribute to A.J. Pero makes this film that much more special. We’re excited to give the fans the highest quality concert film and live recordings ever released in the year of TWISTED SISTER‘s final farewell.”

Other bands filmed in Las Vegas as part of the “Metal Meltdown” include EXTREME, SKID ROW and GREAT WHITE. Stay tuned for details on those releases. 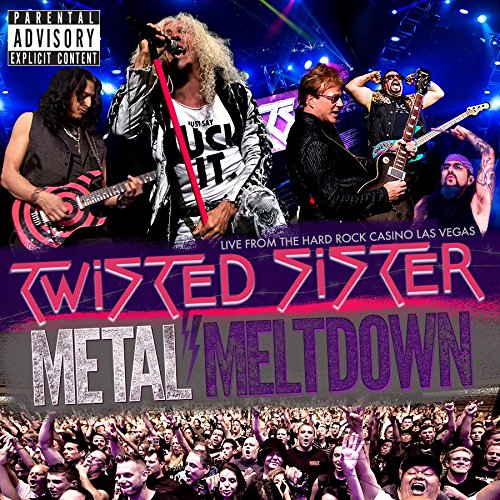 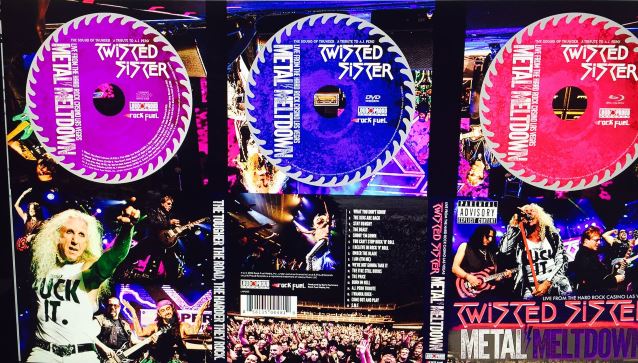