Kaaos TV conducted an interview with vocalist Marco Aro and guitarist Ola Englund of Swedish metallers THE HAUNTED prior to the band’s July 8 concert at the Jalometalli festival in Oulu, Finland. You can now watch the chat below. A couple of excerpts follow (transcribed by BLABBERMOUTH.NET).

On the progress of the songwriting sessions for THE HAUNTED‘s follow-up to 2014’s “Exit Wounds” album:

Ola: “It’s some sort of limbo, where we don’t know. [Laughs] Nah. I mean, we’re on our way. We have all the songs. It’s just that there’s a need for us to get together, because every one of us lives in different places. Marco and I live in Stockholm, but we’re still pretty far away from each other. But the other guys live in… One guy lives in Helsinki, one guy lives in London, and Jonas [Björler, bass] lives in another remote place in Sweden. So just for us to get together like this and plan ahead is something that’s pretty challenging. So that will be the next step, and we haven’t gone there yet, but we’re on our way, for sure. I mean, it’s ramping up to be something really cool, I think.”

On whether the upcoming THE HAUNTED album will pick up where “Exit Wounds” left off, musically speaking:

Ola: “I think that with ‘Exit Wounds’, there was a lot that THE HAUNTED needed to prove, because it was some kind of a comeback album, in a way. And I think the pressure of that album, we don’t have that with this one, so with this one, we can take more time, we can focus more on maybe quality. And we don’t have to do everything super fast or play super-fast songs. I think for the dynamic of the album, it will be a lot better this time than ‘Exit Wounds’. ‘Exit Wounds’ was just a head-on, super-intense album from start to finish, and I think with this one, it’s way more dynamic sounding. I mean, from the songs that we’ve written so far. So it’s gonna be interesting.”

On whether they felt they were rushed during the making of the “Exit Wounds” album:

Ola: “Not necessarily rushed, but it was stressful for us [during] the recording. I mean, we had a deadline, and we were basically late on that deadline a couple of times. If we had gotten more time, we could have put a lot more effort into that album. But everyone was waiting for the album, and we had to do something. But we’re still happy with the album.”

Marco: “[Now] the people understand that we’re back and we’re around, so we don’t have to try to catch a window where we need to fit in there. So, as Ola said, we can keep it a bit more relaxed and more thoughtful.”

On THE HAUNTED‘s plans for the coming months:

Marco: “We have [the] Wacken [Open Air festival] coming up [in early August], [and] that’s the last show that we’re doing before [recording] the album. And then, after that, it’s the studio, getting it out there and trying to go back on the road and do what we do.”

On a possible release date for THE HAUNTED‘s next album:

Ola: “We have [a date in mind] when we want it to be released, but we’re still not putting anything set in stone, because then we’ll get into the same situation as we [were in] with ‘Exit Wounds’. So this time we’re very much more careful with setting anything or saying a specific date or anything like that. So we have an idea, but we don’t wanna let you know.”

Marco: “Because this is such an important album to put out, so we really want to make sure that it gets the right reception and the right work that it needs.”

THE HAUNTED in February completed a short run of North American dates as the support act for AT THE GATES.

“Exit Wounds” was recorded with THE HAUNTED‘s longtime producer Tue Madsen at Denmark’s Antfarm Studio (DARK TRANQUILLITY, HEAVEN SHALL BURN, SICK OF IT ALL). 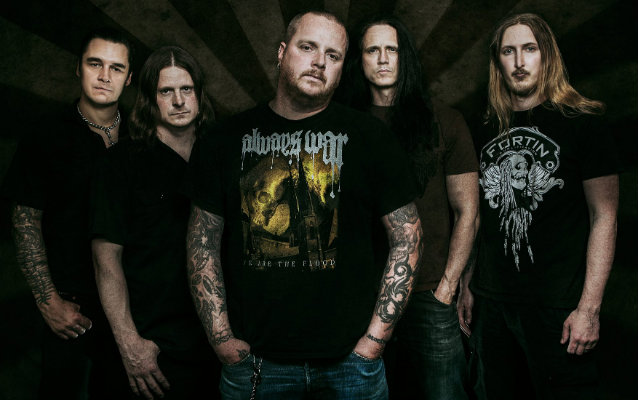