OBITUARY Frontman: 'Sometimes We're Cavemen And Like The Simple Approach To Things'

Rustyn Rose of Metalholic recently conducted an interview with vocalist John Tardy of Florida death metal veterans OBITUARY. You can listen to the full chat below. A few excerpts follow (transcribed by BLABBERMOUTH.NET).

On whether there is any significance to the band’s new album being self-titled:

John: “Not really. We’re certainly a band who is not overthinking things too much. Looking back and people are asking about it, in hindsight and thinking about what happened and why we did that, it was a combination of reasons. Number one, we love the artwork. It’s a take on an older logo that [German cover artist] Andreas [Marschall] did, but in that purer form, that metal form, with the faces in it. We love the look of that logo on a black album by itself. Because we fell in love with that plain and simple look, that was one reason why we looked at it and said, ‘Man, it looks nice just the way it is.’ A lot of bands, sooner or later, you’re allowed to take a mulligan and not worry about coming up with a title of an album, so we thought we’d pull a mulligan there and get away without having a title at all.”

On OBITUARY‘s increased use of melody and groove on their new album:

John: “Yeah, I think that’s always a good thing to have. I think what makes OBITUARY OBITUARY, at least to me, is we do fast stuff, we do slow stuff, but it’s that middle, mid-tempo groovy stuff that is really what defines OBITUARY and makes OBITUARY OBITUARY. Sometimes the older you get, we find the more simple a rhythm comes out and the more basic it can be, the heavier it winds up sounding. The song ‘Loathe’, for instance, which is just a ridiculous rhythm by itself and not too many bands could get away with playing something silly as that, but, man, when that thing kicks in, it’s the heaviest thing heard to man. Sometimes we’re cavemen and like the simple approach to things. You need the fast rhythms, you need the slow rhythms, but that meaty stuff is what we really live to come across when we’re out here messing around and writing.”

On the band’s current lineup:

John: “I couldn’t be happier with our current lineup right now. It’s just the five of us. We get along so well. We’re all on the same page. We’re absolutely playing really well live. We’re sounding really tight and right where we need to be. All cylinders are firing. I couldn’t be happier with our lineup. We’re ready to get out and hit that KREATOR [North American] tour for sure.”

On how long it takes for him to look at an album objectively after its release:

John: “We really look back at it pretty soon after it gets mixed and we’re done with it. You go through and you listen to a whole hell of a lot. If I think about the time when we’re sitting in a room and coming up with ideas, to the thousands of times later when we sat and listened to it and tried to arrange it and practice it and do it, then you record it, then you mix it, you listen to that thing a lot. By the time it’s done and handed off and once you give it your final blessing and you’re like, ‘Alright, everybody happy? It’s done.’ That’s when I get into it the most. I listen to it the most and enjoy it the most. Then when you go back, especially if I look at some of our older albums and I go back and put ‘Cause Of Death’ on and listen to that thing, I’m just ‘Ugh…’ It’s painful in a way. It’s like those pictures that your mom has of you hanging up on her wall and you have to walk in with your friends and they see it and it’s an old picture of you. You have a stupid haircut and your mom has a silly shirt on and whatever it is, and you just feel that way. It’s interesting to us when you go back and listen to your music how much stuff you wish you could re-do. Things you wish you could sing better now. Like Donald [Tardy, drums] all the time is like, ‘What happened with that snare drum?’ You’re always critical of yourself down the road and probably certain never to be happy with it. I think this is one of our best-produced records that we’ve done to date. I think the sound of it came out great. I hope in ten years from now, I still think the same thing. There’s always something to be critical about on your albums, but that’s the nature. Most people are like that.”

On his memories of recording 1992’s “The End Complete”:

John: “It was still [producer] Scott Burns, it’s still a Morrisound [Recording] product that we did with that record. I think ‘The End Complete’ was one of our best-selling records, believe it or not. It was a great album cover; we did a video for that thing. We figured when we did ‘Slowly We Rot’, we had so many of those songs written and didn’t plan on doing an album, so when Roadrunner came to us and wanted to do an album, we just gave them some music and it was out there before we knew it. We didn’t pay much attention to it. We got the idea to do the second record, which we wrote fast and got ‘Cause Of Death’ out because we had a bunch of songs for that, too. It was just a matter of finishing up a handful of other songs and we got it. It seems the first two albums were a little bit of a blur. We never did any touring for ‘Slowly We Rot’, and I think some of us weren’t out of high school yet. Even though we did get out and did some touring for ‘Cause Of Death’, it wasn’t until ‘The End Complete’ came around that we all started looking at each other and seeing what was in front of us for what we could possibly do. It was actually a pretty important record for us. One we had time to think about, plan for, and put together as a whole, where the first two flew by really fast without us paying much attention to them.”

“Obituary” will be released on March 17 via Relapse. 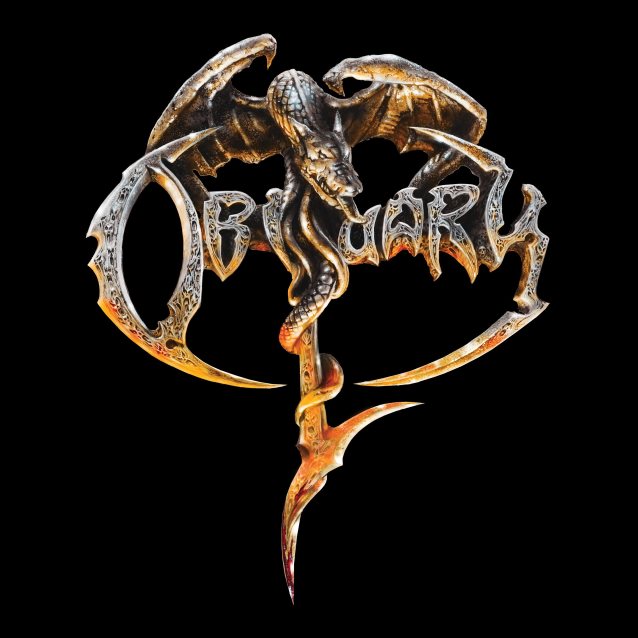