Zippo announced a partnership with KORN to join the Grammy Award-winning, multi-platinum band at select performances throughout 2017’s highly anticipated “The Serenity Of Summer” tour.

Zippo will bring the Zippo Encore experience to several stops on the summer tour, offering fans an opportunity to purchase a collection of custom Zippo lighters featuring original KORN artwork and showcase their artistic skills by creating their own custom designs. The Zippo wheel will also be spinning, giving fans the chance to win gear and other prizes. Even those unable to attend the tour can get in on the action, as the band’s Zippo lighters will be available on Zippo.com.

Furthermore, Zippo Encore will bring music lovers closer to KORN than ever before. Throughout the summer, fans will have the chance to gain exclusive access to rock out in the photo pit or even attend a private acoustic set from the band at a select performance to be named at a later date. Zippo Encore‘s social channels will also be the home to original band interviews and never-before-seen content.

“Since the program’s inception in 2012, Zippo Encore has connected with more than 4.7 million live music lovers at festivals and on tour,” said Lucas Johnson, global brand manager, Zippo. “We’re thrilled to be working with KORN this summer and rewarding fans with unexpected experiences and limited-edition lighters.”

KORN and STONE SOUR‘s summer tour is set to get underway June 16 at the USANA Amphitheatre in Salt Lake City, Utah and then continue through early August.

KORN‘s latest album, “The Serenity Of Suffering”, came out at the end of October. The track “A Different World” features a guest appearance from SLIPKNOT and STONE SOUR frontman Corey Taylor. 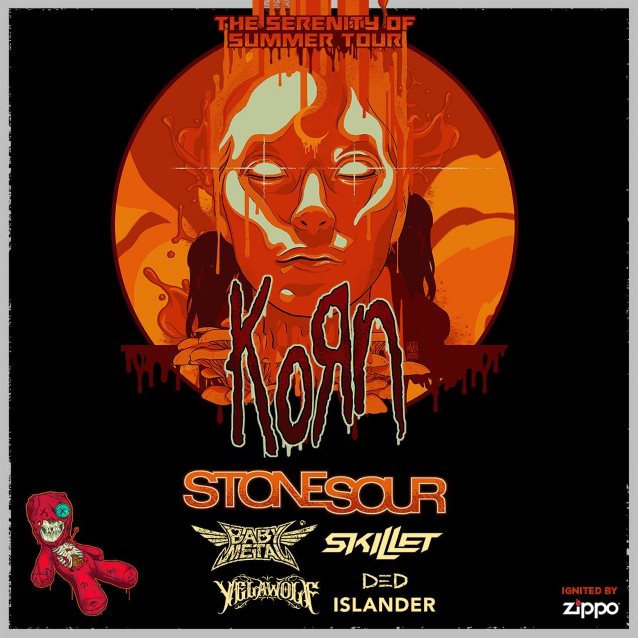