German metal queen Doro Pesch will celebrate the thirtieth anniversary of WARLOCK‘s “Triumph And Agony” album on a short U.S. tour in September.

“Triumph And Agony” was WARLOCK‘s fourth and final album. By the late 1980s, Pesch was the only original member remaining in the group, and under legal threats from former management, decided to carry on under the DORO banner rather than put her career on hold fighting over the rights to the WARLOCK name. (Pesch has since won back the right to use the WARLOCK name.)

Confirmed dates are as follows:

In a 2000 interview with Metal Rules, Doro stated about WARLOCK: “I loved that so much and my heart and soul was so much into it. I was totally devastated when it broke up and it broke up not because of the band but because of all the bullshit around it. It was the record companies, the management, everything. The band had no control anymore, everybody else had, and the band did not. It was really tough and there were a lot of problems and I was totally heartbroken about it. But those times were awesome, man, it was awesome! I will always treasure them. I love to think about the great times.”

Doro told Get Ready To Rock! that “everything fell into place” for WARLOCK after “Triumph And Agony” was released. “The record company was totally behind it, MTV put our song ‘All We Are’ on heavy rotation, which was a big plus, I must say, the fans were there and metal was at its peak between 1987 and 1988. Sometimes you do wish for everything to fall into place, but it’s very rare that this happens as things need to work like a watch.”

Doro released a brand-new package titled “Strong And Proud – 30 Years Of Rock And Metal”, in June 2016 via Nuclear Blast. It contains three decades of Doro — three unforgettable nights — forever captured on three DVDs and two Blu-rays; including an two-hour-plus great music movie, which delivers deep insights behind the scenes and inside the heart of Doro. 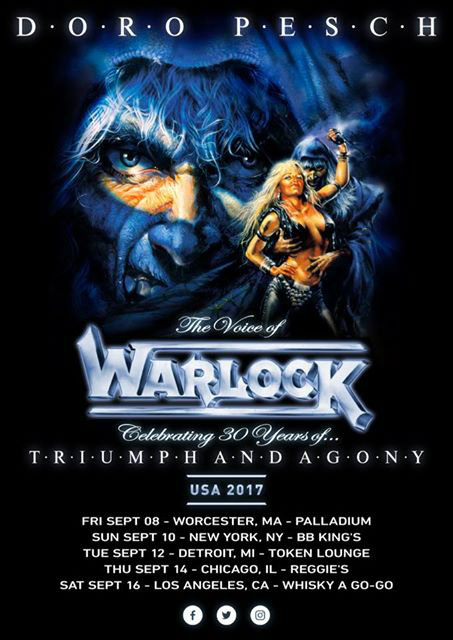