Due to a “sudden serious health issue,” drummer Joe Hasselvander will be unable to join his RAVEN bandmates on their upcoming tour.

Says the group: “As you can imagine, the health and well being of our good mate and partner in mayhem is paramount in importance. However, in order to meet our obligations to our fans, we will still be playing all upcoming shows with the assistance of some amazing fill-in drummers who have stepped up to the plate to help the show go on.

“[On] Thursday [May 18] in Chicago, Jimmy Mess from TATTOOED MILLIONAIRES will do the honors, and the shows this weekend on the East Coast we are extremely honored to have FEAR FACTORY drummer and all-around metal legend Mike Heller behind the kit. And for the European tour, KILL RITUAL drummer Dave Chedrick will do the honors.

“Please join with us in wishing Joe best wishes and a speedy recovery.”

RAVEN‘s latest album, “ExtermiNation”, was released in April 2015 via SPV/Steamhammer.

Considered part of the “New Wave Of British Heavy Metal” movement of the early ’80s, RAVEN — led by Newcastle natives/brothers John Gallagher (vocals/bass) and Mark Gallagher (guitar) — is perhaps best remembered for its trailblazing tours in America in the early ’80s that gave groups like METALLICA and ANTHRAX their first taste of the road.

RAVEN‘s albums “Rock Until You Drop”, “Wiped Out” and “All For One” virtually invented both the speed metal and power metal genres, with the band consistently pushing the envelope while retaining its unique sound and attack — both in the studio and in their true element: onstage. 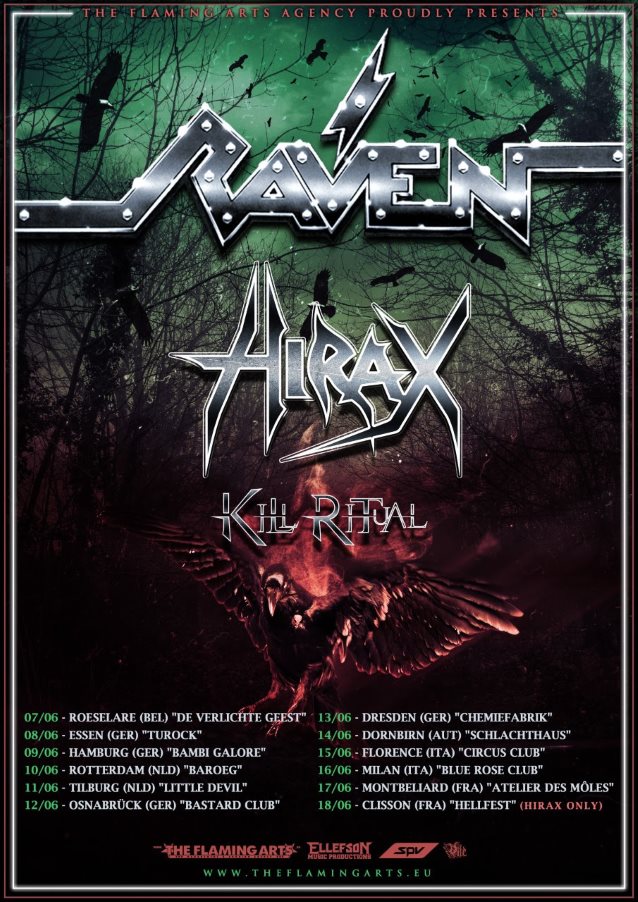 RAVEN Drummer Sidelined Due To 'Sudden Serious Health Issue'
Tagged on: HRRL
tom lats May 16, 2017May 16, 2017 Rock News No Comments