Watch GENE SIMMONS Perform With His Solo Band In Philadelphia

Legendary KISS bassist/vocalist Gene Simmons played a special concert dubbed “An Evening With Gene Simmons And His Band” on June 2 at Trocadero Theatre in Philadelphia, Pennsylvania as part of a partnership with Wizard World, Inc., the preeminent producer of Wizard World Comic Cons across North America. Fan-filmed video footage of the show can be seen below.

“This is gonna be a first for me,” Simmons told CantonRep.com about playing his own shows. “Outside of KISS, I’ve never done a solo tour. I never did anything like that. Every once in a while, I’ll jump up on stage and do a song with somebody. Johnny Depp and I did a few songs together, a few other knuckleheads, but that’s about it. When Wizard World and I agreed to do five events together, the idea of jumping up onstage and gulping it on for an hour or so came up. And I got a great bunch of guys, real rocking guys who are gonna get up with me, and we’ll play all the hits and have ourselves a good old time.”

Simmons also spoke about performing some of the deeper cuts live with his solo band, such as “Charisma” and “Got Love For Sale”. He told Michael Cavacini: “When the masses show up at our concerts, they’re the diehards who’ve been with me since day one. If you’re five years old, fifteen years old or even twenty years old, you still don’t scratch the surface because we’ve been around for forty-three years. If KISS played what they used to call in the music industry a b-side of an album, some of the more obscure stuff, most of the people wouldn’t know it. If you go to [see] THE [ROLLING] STONES and they play something obscure, everybody sits down because they don’t know it. They know ‘Satisfaction’, ‘Jumpin’ Jack Flash’ and a few others. Doing these smaller concert halls, which hold a thousand to three thousand people, means they get filled up by real diehard fans. They don’t want to hear the same-old, same-old. They want to hear nuggets, as they say. It’s a hoot for me because I’ve never really had a chance to do this stuff live. It’s been a lot of fun. There’s nothing like playing ‘Charisma’ and seeing a few thousand fans mouth every single word. Lot of fun.”

Simmons said in a recent interview that he was still working on his box set that will include “a hundred and fifty songs that have never been released. That news is gonna be released soon.” 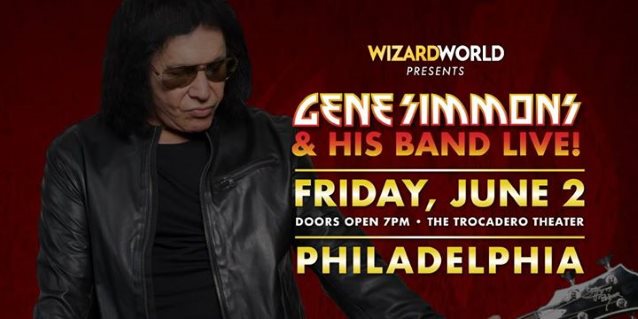