Los Angeles rockers BLACK VEIL BRIDES will release their fifth album, “Vale”, on January 12 via Lava/Universal Republic. The follow-up to BLACK VEIL BRIDES‘ 2014 self-titled effort, which was originally expected to arrive in September, was produced by John Feldmann at his Southern California studio.

The songs from the disc, “The Outsider” and “My Vow”, can be streamed below.

During a recent interview with the Rock Sound Podcast, BLACK VEIL BRIDES frontman Andy Biersack explained the delay in getting the new disc released. He said: “First of all, we took fifteen months to make the record, and so in that way, we really wanted everything to be as perfect as possible. And the original deadline that we gave ourselves while the record was completed and the mixing was completed, we weren’t able to get the artwork and assets and all the stuff together exactly how we wanted it. And while listening to it, there were also elements and stuff I wanted to change.

“People don’t necessarily understand that when you’re on a major label that they determine when stuff is released,” he continued. “And so they gave us the initial deadline that they would have preferred we released the record on the first time, and they were just unable to get the assets together, and also on our end, we just weren’t quite done at the original time. So we had a discussion with the label and they were in agreement with us that it seemed like we should try to line it up with something big tour-wise.”

Biersack delved deeper into BLACK VEIL BRIDES‘ reasons for wanting to take a bit longer to make an album they were all really happy with, explaining: “We’ve been doing this for a very long time, and it seemed like if we were gonna take time to make a record, it seemed like the right time to really try to sink our teeth into doing something that we really spent time cultivating. Before, it’s not to say that we didn’t spend time with it, but we were on deadlines and we were also a very young band that people were saying, ‘We’ve gotta get this record out. We’ve gotta get you on tour.’ And we’ve never really been afforded the opportunity to take our time with something.

Asked about the overall sound of the new BLACK VEIL BRIDES album, Andy said: “We made ‘Wretched And Divine [The Story Of The Wild Ones]’ with John in 2013, and that was, at least commercially, our most successful record to date. A song like ‘In The End’ is probably our most successful song. And so a lot of times, people point to that record as the sound of the band. But what I think is interesting is that we have evolved significantly, I think, from record to record — from the first record to the fifth record. The previous record that we made with [producer] Bob Rock was a much more straight-ahead, hard rock, heavy metal record. I think that this album — and everybody says this, of course, because you want it to be true — but at least for me, I believe that it’s a nice combination of many different eras of the band. I think that it represents all the different places that we’ve been while retaining that Feldmann thing, that thing about Feldy that I don’t think anybody else can even touch or come close to; he just knows how to make things huge. And writing with Feldy is one of my favorite things, so to be able to come back into the world of doing heavy, darker rock music after doing a pop record together [with ANDY BLACK].

“We’ve been in a band together — Jake and Jinxx [guitar] and Ashley [Purdy, bass] and C.C. [Christian Coma, drums] and I — have been a band together for a decade, we know each other pretty well and the writing process is pretty simple in that way. So I think, all in all, it’s a record that’s very representative of where we are as a band at this point in our career. I’m not gonna tell you, ‘Well, it’s our heaviest and most melodic,’ or, ‘This is the best…’ I think that it’s just a record that we’re really, really proud of and I think it’s a great album and I think the fans are gonna like it, and it’s a long time coming. At this point, it’ll be four years since the last BLACK VEIL record, by the time it’s out. So I think it’s a long time coming, and I think people are gonna really enjoy it.”

BLACK VEIL BRIDES will embark on a North American co-headline tour, dubbed “The Resurrection Tour”, with ASKING ALEXANDRIA, kicking off January 10 at The Complex in Salt Lake City, Utah, rolling through major markets coast to coast, and concluding in Las Vegas, Nevada at House of Blues on March 2. CROWN THE EMPIRE will act as support on all dates. 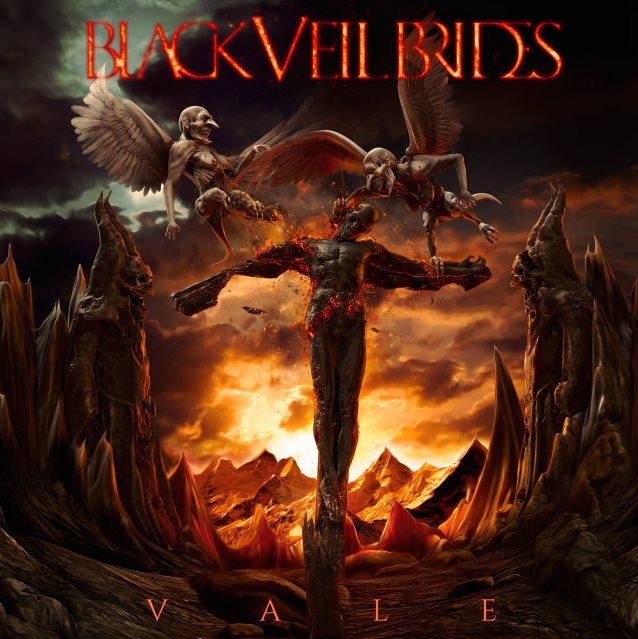