Fan-filmed video footage of PAPA ROACH paying tribute to Chester Bennington by performing a partial cover of the LINKIN PARK classic “In The End” on September 20 at Gasometer in Vienna, Austria can be seen below.

PAPA ROACH singer Jacoby Shaddix admitted in several interviews that he came close to taking his own life in 2012 as he struggled with both marital problems and falling off the wagon druing the making of the band’s “The Connection” album.

“There was a moment in the record where I was suicidal,” Shaddix told the Associated Press at the time. “I was done. I’m like, ‘I’m over this. I can’t do this anymore. I can’t take this pain anymore. Like, I feel so alone and broken and just shattered.’

“Like, everything that I had worked for in my life and said that I wasn’t going to be, I don’t want to be like my father — what happens? I’m like this drunk fuckup that destroyed his family,” he said. “I did it. I’m sitting there like, ‘I did everything I said I’d never do.'”

He added: “I was just an emotional wreck, couldn’t do nothing, man. I was just paralyzed emotionally. Musically, I was just stunned. I didn’t even want to work on the record. I was just like, ‘I just can’t do this.’ My producer’s like, ‘The best thing you do right now is write about exactly what’s going on, just tell it and be a hundred percent completely honest about what’s going on in your life.”

Asked to describe in more detail what he was feeling when he was dealing with these issues, Shaddix said: “I’ll tell you this about when you’re in that moment and you feel like you want to end it all … you do not think rationally, you don’t think straight. Your emotions, you are just so caught up in the pain. … And luckily I just had these moments of clarity at night or I just thought about what would happen. What would it be like? My family’s life and my band’s life, what would their lives be like if I wasn’t here? It’s terrible. Like, I ran that story in my head and I’m like, ‘Why would I do something so selfish?’ It’s a terrible thing and I hate to like really admit that’s where I was, but that’s where I was.”

Bennington committed suicide at the age of 41 on July 20 at his home in the Los Angeles area, leaving behind a wife and six children.

PAPA ROACH has spent the last few months touring in support of its ninth studio album, “Crooked Teeth”, which was released on May 19 via Eleven Seven Music. 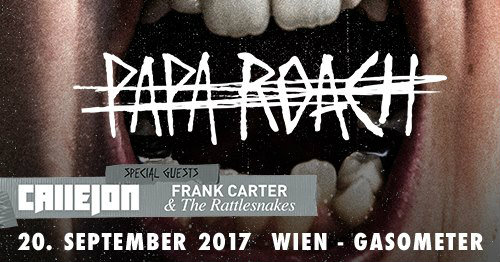