Former PANTERA frontman Philip Anselmo has blasted “false journalism in the metal community” for suggesting he was racist because a video surfaced of him last year giving the right-arm salute and yelling a white-supremacist slogan at a California concert.

At a January 2016 “Dimebash” event at the Lucky Strike Live in Hollywood in honor of late PANTERA guitarist “Dimebag” Darrell Abbott, Anselmo performed the PANTERA classic “Walk”. As he left the stage, he made a Nazi-style salute. He appeared to say “white power” as he made the gesture, but later claimed he was joking about drinking white wine backstage and was reacting to the audience members up front who he says were taunting him.

In the latest issue of Mass Media Magazine, Anselmo once again addressed the incident, insisting that he was treated unfairly by people who jumped to conclusions without attempting to find out the facts.

“There is false journalism in the metal community, and the result is all knee-jerk reaction,” Anselmo said. “Look at this all and what happened. There is no questions asked in the moment. It is just straight to the persection.

“I will explain it again, and perhaps readers can see it from my point of view.

“I am the kind of guy who sits back and watches. I see the world and the factions of the world who are offended, and the offenders who are doing it just for fun.

“I thought I was an individual who would not get caught up in anything, but I put myself into a box that night, you know.

“I am not into identity politics. I am into individuals with strong minds. That is all that fucking matters.”

He continued: “To get back to what I was saying… I was at Dime‘s benefit show last year. This was one of the first ones I had ever done, and from the second I got on stage, I was heckled constantly by a couple of motherfuckers with an agenda. I had warned them several times to stop. You can clearly hear me do this several times, ’cause I had the microphone in my hand. You can hear me say, ‘If you call me that one more fuckin’ time, I will invite you on this fuckin’ stage so I can break your fuckin’ jaw!’

“Unfortunately, I showed those kids what they were fuckin’ looking for. The scary things, and the ugliness. And ugly it was. I get it. But did I lay a fuckin’ finger on anybody? I said what they wanted to hear… and that’s on me.

“The outcome wasn’t meant to support racism. That is just not me, and those who know me, they know that.”

Anselmo also repeated his claim that he identifies with marginalized peoples because he grew up in New Orleans’s French Quarter.

“Honestly, I take it all personal, and it pisses me the fuck off,” he said. “Yes, it upsets me. Once again, it goes back to my upbringing, where the majority of my city was black. I had black teachers who I adored. They mentored me and made me the person I am today.

“When I am watching videos and people are jumping on this racist bandwagon shit, to me, it is, like, we should be intellectually beyond this shit already. We are holding progress back. It is an unfortunate truth.”

Although Anselmo has faced accusations of racism in the past — the singer once lambasted a “Stop Black On Black Crime” t-shirt onstage (he later said he didn’t understand what the phrase meant) — he refuses to back down or apologize for his actions.

“I come from the school of boxing, so I stay strong,” he told Mass Media Magazine. “Even some of those who piled on after the incident damn well know what I am a regular fucking dude who struggles like everybody else. There is not a perfect person out there.

“I do not set out to upset anyone. I do, more than anything, want to make friends and be cool. I am for getting along and not holding grudges if I don’t have to.”

In the days following the incident, MACHINE HEAD‘s Robb Flynn — who played PANTERA songs with Anselmo at “Dimebash” — released an eleven-minute response video in which he denounced Anselmo as a “big bully” and a racist. He concluded by saying that he would never play another PANTERA song again. ANTHRAX‘s Scott Ian, who is Jewish, released a statement on his official web site saying, “Philip‘s actions were vile” and invited Anselmo to make a donation to the Simon Wiesenthal Center.

Former PANTERA drummer Vinnie Paul Abbott, who hasn’t spoken to Anselmo since the band’s split in 2003, was dismissive when asked for a comment on the singer’s white-power salute. “I can’t speak for him,” Vinnie said in a 2016 interview. “He’s done a lot of things that tarnish the image of what PANTERA was back then and what it stood for and what it was all about. And it’s sad.” 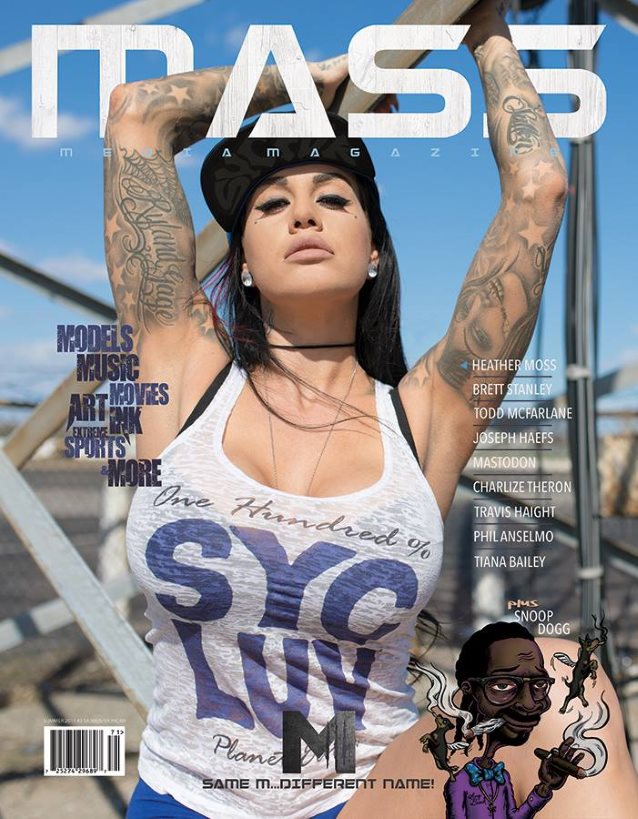