RAMMSTEIN Guitarist On Upcoming Album: 'I Feel Like It's Gonna Be The Last Record We Do'

RAMMSTEIN guitarist Richard Kruspe says that the band’s upcoming album could be its last.

The German industrial metallers are working on what will be their seventh studio disc — and in an interview with Resurrection Fest in July, Kruspe spoke about how the follow-up to 2009’s “Liebe Ist Für Alle Da” was shaping up.

“I was very skeptical to go back with RAMMSTEIN into the studio, because last time we almost broke up because of making a record,” the guitarist admitted (see video below). “So it’s just always very, very stressful and painful. And I think going through that experience, I was a little nervous about that. And we came up with a deal, or an agreement. We said that we wanna go back and only record maybe five songs, to not put any pressure on us.

“We started, like, two years ago, and I can say just playing with the guys, for some reason, it was very natural and I had a lot of fun,” he continued. “And since then, we’ve just created around twenty-eight ideas — I wouldn’t say ‘songs,’ but ideas. And somehow we managed to move back to the beginning of the world of RAMMSTEIN where we, basically, are very emotional and very enthusiastic about writing again. It wasn’t like that before. We came back to a point that everyone is really respecting the other one, and it feels kind of like a circle almost, that we start from zero again, which feels nice. It’s kind of like you’ve been through all the problems, which you have when you play with the same lineup for twenty-two years, which is difficult. A lot of bands, they can’t really stay there, they’re changing people, and we don’t really believe in that. We’ve been through a lot of downs, and there were probably a lot of moments where I felt like, ‘I don’t wanna do it anymore, I don’t wann be in a band anymore,’ but somehow we’ve managed it, through talking and communication, to stay together. So here we are, writing and feeling very good about it, so I’m pleased.”

Regarding the overall direction of the new RAMMSTEIN material, Kruspe said: “Of course, a band wants to always do the best album [it can] do at the moment. This time, what we’re really gonna do is we’ll try changing the producer team. We’ve worked with our producer for the last six records, and this time we felt like we need a chance, so at the moment we’re meeting new producers and finding what is the best for the team at the moment.

“I just feel like, for some reason, that it’s gonna be the last record we do. That’s a feeling — I can be wrong, but just at the moment, I feel like this is maybe the last [shot at making an album] we have, and I wanna give two hundred percent in that and make it as good as it can be,” he added. “When I listen to the stuff, there’s so much potential, and I’m very pleased about what we do at the moment. So I’m looking really forward to start recording maybe next year.”

“In RAMMSTEIN, it’s a democracy, so everyone has a vote,” he explained. “And if you have three saying ‘yes’ and three saying ‘no,’ you have to have a compromise, so that’s what we did.”

Kruspe also talked about why it takes RAMMSTEIN so long to release new music compared to some other bands.

“There’s a different reason for everything, obviously,” he said. “First of all, the music industry has changed a lot. It used to be that the main income for bands would be making records and selling records. That has changed. Secondly, we always believed, and we didn’t have any other chances to believe in our show. In the beginning of RAMMSTEIN, nobody would play any songs on the radio, nobody would take our videos and show ’em on TV — we had a lot of trouble with that — so the only chance we had was to really focus on our live show. And we didn’t know at this point that it would have changed after [so many] years. Our focus was always playing live in the beginning.

“As a European, or a German band especially, you have to tour much more than other, American bands,” he continued. “They play their market and then they come to Europe and play maybe two or whatever, five or ten, shows — that’s it. So we always had to play the European market and go back to America, so we played much more, I guess. So we always had a different rhythm. And also, the other reason is that when we do a record, it takes forever, because, again, we’re six members that have six different opinions about everything and everyone in the band thinks that he’s on the right path. So it’s a lot of discussion and compromising — it takes a lot of time until we finish a record. But at the moment, we’re really in a situation that we don’t have to do it. We’re really kind of privileged to not having any pressure — there’s no record companies or managements or something; it’s only us that put pressure on us. And we’re at that point in our lives that we kind of feel that we wanna be sure that what we do is worth putting out. And we also wanna have the freedom to say, ‘You know what? That’s not good enough. Let’s just don’t do it.’ It’s a real privilege to do so, and I’m happy that we’re in this situation.”

The guitarist revealed that making a new RAMMSTEIN album requires “a lot of communication, a lot of love and a lot of reflection about yourself. I mean, there were times I needed distance,” he said. “I moved to New York at one point of my life just to see the bigger picture. It’s very important that you realize and to overcome your ego, [to] see the bigger picture with the band and see what it needs. And sometimes you have to realize that doing more is not even the best formula for the band at the moment. Sometimes you have to step back. It’s just constantly like therapy with yourself, with the band. Fifty percent of our time, we’re pretty much talking about stuff.”

RAMMSTEIN released a new concert DVD and Blu-ray, “Paris”, on May 19. The set was recorded in March 2012 at the then-named Palais Omnisports de Paris-Bercy in Paris (now AccorHotels Arena) during RAMMSTEIN‘s “Made In Germany” tour, and was helmed by the band’s longtime collaborator, Swedish director Jonas Åkerlund. 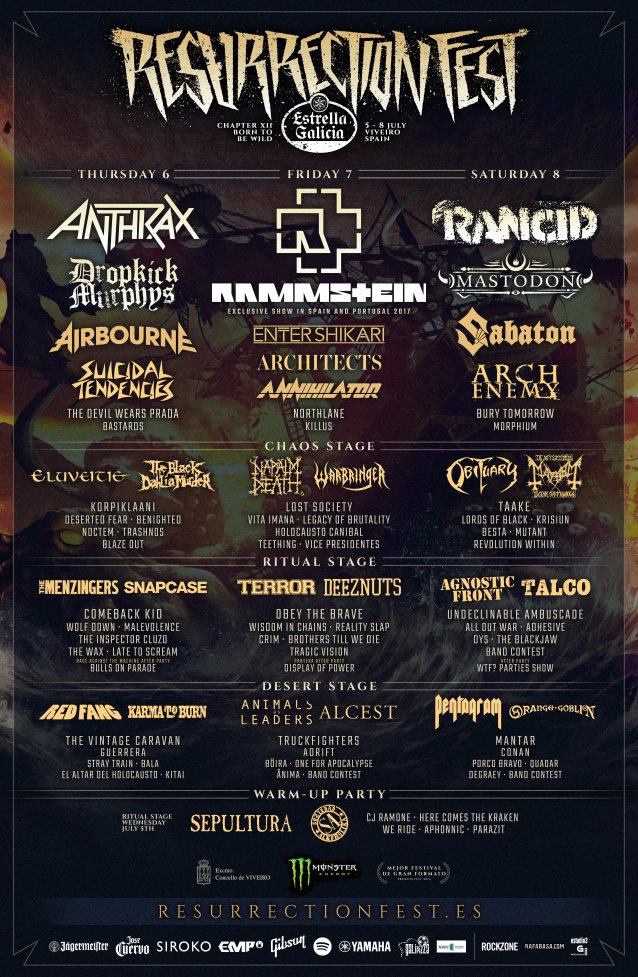