The event, which was held on June 27, was organized by Creative Community For Peace (CCFP), an organization comprised of prominent members of the entertainment industry devoted to promoting the arts as a means to peace and to countering the cultural boycott of Israel.

After his performance, Draiman, who is a CCFP member, urged his colleagues to continue their efforts to make sure music is never silenced. “I encourage each one of you to support the exchanging of ideas, culturally, spiritually, philosophically and politically with everyone on the face of this planet,” he said. “Let’s teach ourselves how to build those bridges of peace.”

Consul General of Israel Sam Grundwerg shared a special message of the importance of music and the arts in bringing people together.

At the event’s conclusion, guests were given a private viewing and tour of “Paul Simon Words & Music”, an exhibit organized by the Rock & Roll Hall Of Fame Museum.

DISTURBED‘s cover version of “The Sound Of Silence” was officially certified double platinum by the Recording Industry Association Of America on May 26, commemorating more than two million units’ worth of sales and streams.

The video for DISTURBED‘s version of “Silence”, which was released in December 2015, has been seen more than 271 million times, a record number of views on YouTube for the group. 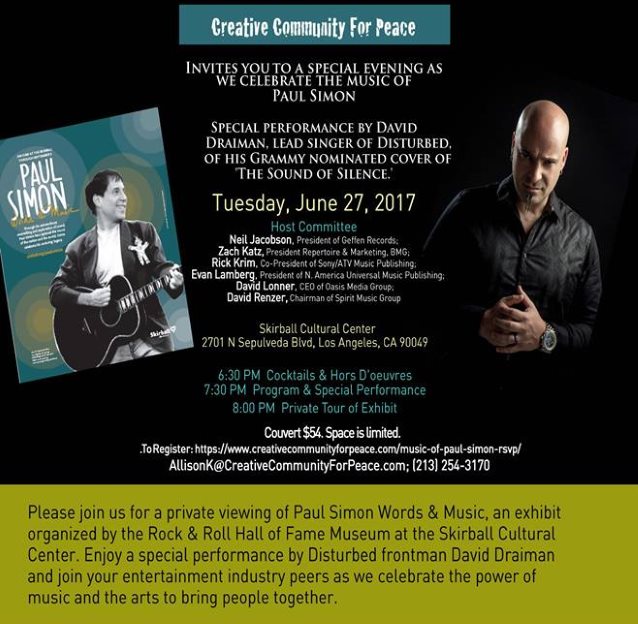