BUTCHER BABIES have released the music video for their single “Headspin”. The track is taken from the band’s third album, “Lilith”, which was released on October 27 via Century Media. The follow-up to 2015’s “Take It Like A Man” was produced by Steve Evetts (THE DILLINGER ESCAPE PLAN, SEPULTURA, SUICIDE SILENCE) and marks the band’s recording debut with new drummer, Chase Brickenden, who replaced Chris Warner last year.

Co-frontwoman Carla Harvey states about the clip: “With ‘Headspin’, we finally wrote about a topic that we’ve strayed away from for years: sex, one of the most basic human needs. This song drips sensuality and we wanted the video for it to do the same.

“We enlisted two pros, Jessa Rhodes and Zander Corvus, to tell this story of lust for us and towed the lines of truth versus fantasy by experimenting with virtual reality. It’s also a bit of social commentary on how much of our reality is skewed in this social media-driven world.”

Harvey told Meltdown Of Detroit’s WRIF radio station that the music on “Lilith” “runs the gamut” from “great thrash metal” to “a little bit of ’90s influence.” She said: “We’re singing, we’re screaming and it’s just a great, great album. I couldn’t be prouder of it. I think there’s four songs where we do predominantly singing on it. And normally that would scare even me, ’cause I’m, like, ‘I’m a metal girl! I don’t wanna be singing.’ But it’s so beautiful — it really is. So it’s kind of ballady, but not too ballady. It’s very dark, sensual — the lyrics are very sensual on this album.”

She continued: “I think we’re bringing a little bit of the sexy back on this album that we kind of steered away from for a while. When we were building up our career, we wanted to be taken so seriously as metal chicks, so I think we kind of let those hindrances go a little bit and said, ‘Let’s just be us in all aspects of us’ — from the metal to the sexy to everything else.”

Although there is a lot of variety on BUTCHER BABIES‘ latest effort, Carla was quick to point out that “I couldn’t do an album with no thrash on it, ’cause that’s my passion. I think my favorite song on the album is a completely ridiculous thrash metal song that you’ll hear,” she said. “It’s just amazing. In fact, one line in the song is about my Corvette that is always broken down. I have a ’75 Corvette, ’cause I’m a real Detroit girl with a real American car. The song has completely ridiculous lyrics, but it’s so cool — total thrash.”

Regarding BUTCHER BABIES‘ collaboration with Evetts, Carla said: “He doesn’t do any Auto-Tuning or any pitching or anything like that, so every note on this album is a hundred percent authentic. And it’s really cool to be able to say that about an album nowadays, I think, because people are so used to hearing everything Auto-Tuned and touched up and fixed up. This album is exactly what we’ve always wanted to do — it’s something passionate and raw — and we’re all just over the moon for it.”

She added: “That’s the one thing that we’ve always wanted to capture, because I think that we’re a great live band, and when you’re a good live band, you wanna capture that energy, and we finally found a producer that can help harness that live energy, actually, into the album.”

BUTCHER BABIES are supporting HOLLYWOOD UNDEAD on a U.S. tour which kicked off on October 1 in Atlanta, Georgia. 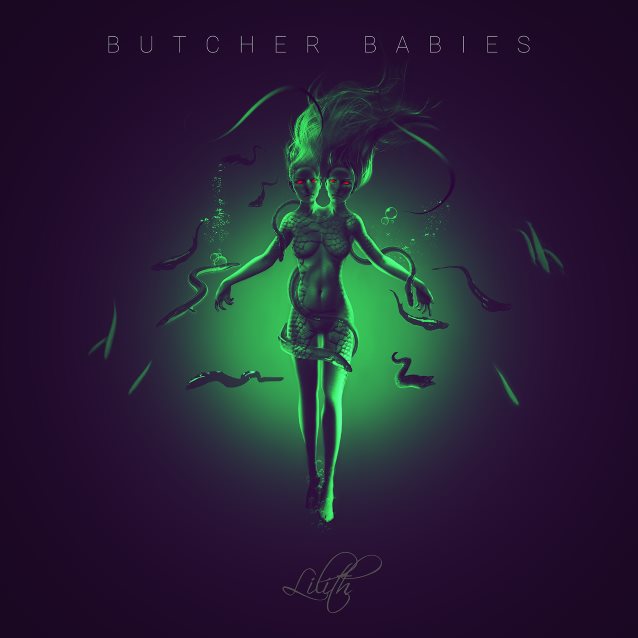