GENE SIMMONS On 'Vault' Box Set: 'I Didn't Want This To Come Out After I Was Dead And Gone'

On the inspiration behind the “Vault” release:

Gene: “I’m doing this for me. Over the years, being up on that stage, you never get to meet anybody. There’s always that distance, and every once in a while, I meet somebody who’s got tattoos and everything, and you don’t know what it’s meant, and I get all choked up. I understand more when I hear people talking that music is more than music — that it’s the soundtrack of your life, and that people get married to songs, not just mine. You play it at parties. It’s a song you and your girlfriend… songs are always more than songs, and if you find the right song, stadiums will sing it together and feel that connection and you get that chill up your spine. Before the curtain draws for the final time — and again, I’m not announcing any farewell; we’re doing fine — I’m going to go out there and hand-deliver the largest box set of all time directly into the hands of the fans who made my life possible, as my way of saying thank you… I didn’t want this stuff to come out after I was dead and gone, if you see what I mean. I want to celebrate it while I’m here with the fans.”

On how long it took to bring the project to life:

Gene: “It’s taken ten years. Eight years of it had to do with searching for the songs and when I found the songs on… what people may not realize is, the recording has changed. Originally, recording was done on tape — 24-track tape, 16-track tape, two-track tape, even eight-track tape. All of that exists in the box set. Over time, because of condensation and oxidation and other big words, the tape would warp. The humidity would get in the tape. I would literally like a turkey, you had to put it into a special kind of oven and cook the tape so that you could play it at least once, and so the tape wouldn’t self-destruct. All that took forever — it took years and years, and to get the lawyers to understand it and stuff, it took a long time. I’m proud to say about four months ago, we finally finished that process. One day, I started at noon, I sat back and started playing all the songs back-to-back. It took me 18 hours to get through it all.”

On whether he had any help compiling the contents:

Gene: “I did it all myself. That’s part of the thing that made it so personal for me. I remember every moment I was in the studio. Often, when I couldn’t get the guys in KISS or anybody else to play on the demos, I’d wind up playing all the instruments — bass, drums, guitar, all the background and all that. Of course, that always took longer, and when I could get into the studio with people like the Van Halen brothers or something, it would go faster, of course. In the days when we had to hide our faces and we couldn’t go out in public, all I could do was stay in the rooms. In those days, there wasn’t cable television, so all you could do was watch TV and when the TV went off, I’d write songs. What else is there to do? I’ve never been high or drunk in my life, so all I did was work. That’s still the same philosophy.”

“Gene Simmons: The Vault Experience” is being made available in partnership with Rhino Entertainment. The set commemorates and celebrates Simmons‘s notorious five-decade journey as a rock icon, offering fans around the world a limited-edition collectible Vault with contents that offer a unique look into The Demon’s colorful life, including never-before-released songs, photos, stories and collectible items. Additionally, every Vault will be personally delivered to each fan by Simmons himself.

“Gene Simmons: The Vault Experience” begins with a personal delivery, by Simmons himself, of a numbered, limited-edition, 17″ x 25″ 38-pound Vault, during Simmons‘s “Vault World Tour”, set to take place January 2018 through December 2018.

During the one-on-one meet and greets with the delivery of the Vaults, Simmons will travel around the world, to a designated location to take photos and video with the fan and a guest, and sign autographs. In addition to the private meeting, fans will receive a Vault Pre-Pack and join a small group of other fans for “Songs And Stories” from “The Vault” and a question-and-answer session with Simmons. Within a month of purchase, fans will also receive via mail a Vault Pre-Pack featuring a USB including the first track “Are You Ready”, a signed golden ticket, exclusive t-shirt, and a laminate. Ordering by December 5 will ensure delivery of the Vault Pre-Pack by December 23, just in time for holiday gift giving. 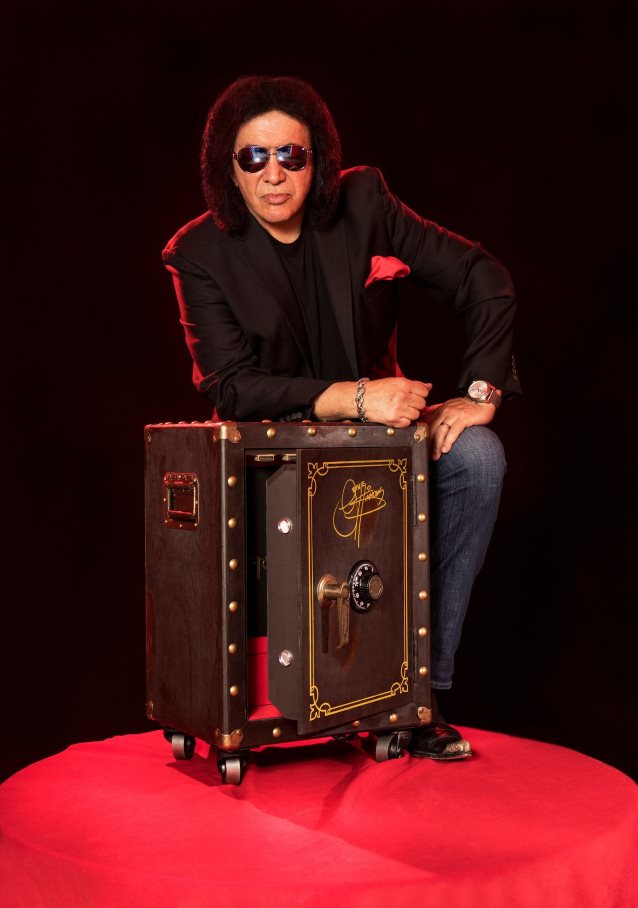