On October 17, IRON MAIDEN singer Bruce Dickinson read from his recently released autobiography, “What Does This Button Do?”, and answered questions from the audience during a special event at Troxy in London, England. The session was livestreamed via Facebook and can be seen below.

Asked by one fan how he has managed to keep his voice “in such good nick over the years,’ Bruce said: “Well, that’s a very nice compliment. Thank you for thinking it’s in good nick all these years.” He added that he didn’t really have any secrets on how to keep his voice in shape. “Just sort of common sense, actually,” he said. “And if you get sick, then you have to have the courage to say, ‘No. Sorry. I’m gonna have to cancel something,’ because it’s actually properly sick and you can damage it then forever if you go sing. Vocal strain and things like that, it’s a little different, but actually proper, full-on sickness — laryngitis, things like that — you have to be careful. And other than that, a lot of it is common sense. So going around injecting heroin, drugs, snorting large quantities of baking soda, or whatever the hell people do, and things like that, opiate addiction — all those sorts of things — generally not good for voices and particularly for people. In fact, in general, what’s good for people is usually good for voices. And lots of sleep — you need lots and lots of sleep. That’s it. And talking — talking is very bad. Which means I lock myself in a darkened room and go to sleep a lot on tour, which means I’m really terribly dull company. But now I’m not on tour, so I can talk as much I like. [Laughs]”

Dickinson was also asked how IRON MAIDEN has managed to stay together for as long as it has. “I wish I could tell you,” he said. “Again, I allude to that in the book, and the closest I can get is the porridge has to be just right. All familiar with the fairytale story “The Three Bears’? ‘Too hot, too cold, just right.’ And bands are like that, personalities are like that. We’re fragile little organisms, really. Even though we have loads of trucks and make lots of noise and things like that, the relationships in the band are quite fragile. But with MAIDEN we’re very lucky that we’re all born of the same mothership, which is IRON MAIDEN, and our loyalty is primarily to MAIDEN and probably then to each other. Which makes life really kind of easy in terms of getting on with your fellow bandmates, because you give everybody space, ’cause we realize that we’re all there together to do the same thing, which is to deliver an amazing IRON MAIDEN show or an amazing IRON MAIDEN record, or do whatever it takes to do that. So that’s the secret.”

Dey Street Books (formerly It Books), an imprint of HarperCollins Publishers, will publish “What Does This Button Do?” in the U.S. on October 31.

What Does This Button Do? – A Conversation With Bruce Dickinson 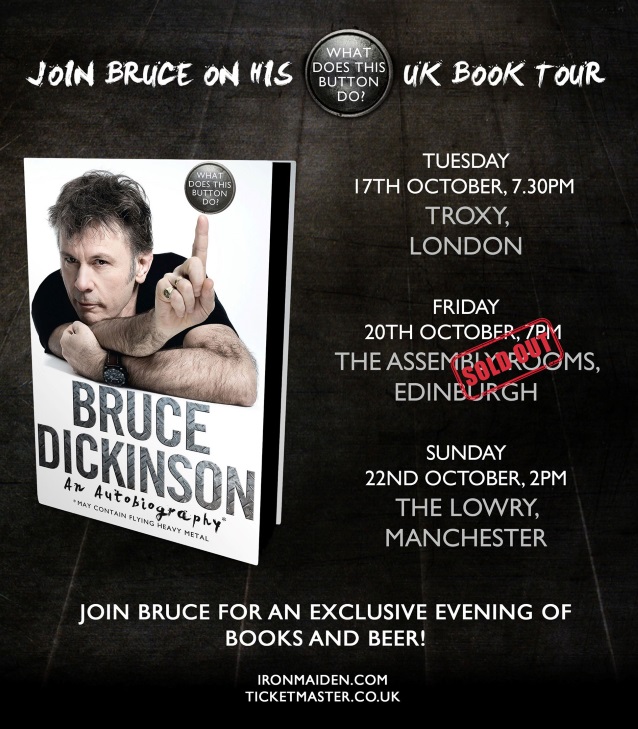