OF MICE & MEN Drummer Is 'Really Excited' About Upcoming Album

OF MICE & MEN drummer Valentino Arteaga spoke to Fuel The Scene magazine at this year’s Louder Than Life festival about the band’s forthcoming album. The disc will mark OF MICE & MEN‘s first full-length release without vocalist Austin Carlile, who left the group due to his ongoing battle with Marfan syndrome, a rare genetic disorder that afflicts the connective tissue holding the body’s cells, organs and tissue together. Handling lead vocals in the band now is bassist Aaron Pauley.

Arteaga said (see video below): “We’re still getting mixes back. We spent the better part of the last couple of months writing and recording the rest of our album, and we’re really excited with it. We’re so proud of it. We think it’s gonna show a good amount of growth.

“We’re always looking for that challenge — OF MICE & MEN is trying to challenge themselves on new records — and I feel like this one’s our fifth one, and we’re really excited,” he continued.

“There has been a lot of change, but, for us, like anybody, you’ve gotta roll with the punches and you’ve gotta create your own destiny, you’ve gotta do this. And so for us, we really wanted to channel that into our music and create the next chapter of OF MICE & MEN, to truly show what we’re about and what OF MICE & MEN is about — all the way back to referencing stuff from our first albums.

“Everything about OF MICE & MEN is a collective with everyone that we’ve ever encountered at our shows and everything, and everyone’s so important to us, and we try to really channel that into the music.”

According to Arteaga, OF MICE & MEN recently shot a video for one of the tracks from the forthcoming album, and “it came out really, really awesome,” he said.

Valentino also talked about the OF MICE & MEN songwriting process, saying: “We write whenever. If an idea hits, with technology these days, we’re all pretty well faceted with our iPhones, with our Macbooks, with our instruments. There’s V-Drums, there’s little guitars that we have on the bus that we can plug into the computers and they sound like huge guitars.

“This is our life, so whether we’re on tour or we’re at home, it’s so difficult to try and get yourself into, ‘Okay, now I’m gonna sit down and do my homework,'” he explained. “It’s not like that. We try and do it as we go. And we wrote almost half our album on tour this last summer. After playing festival shows, we’d be, like, ‘Dude, GOJIRA just rocked that crowd.’ And seeing these bands totally demolish, and it being real kick-ass metal music [was a huge source of inspiration].

“Inspiration strikes whenever,” he added. “OF MICE is always writing. We’ve already kind of started some new stuff. We just write and then we kind of put an album together with the best songs that we feel [we’ve come up with]. We had over forty [song ideas] for this album; there were so many. So it’s all a process. And we try and be so in tune with each other that we all know, ‘Yeah, we all love this one. Yeah, we all love this one.’ And then putting together the album becomes a little bit easier in that sense.”

An OF MICE & MEN documentary called “Unbreakable” will be released on Friday, October 13. The short film, which was directed by Johann Ramos, follows the band across multiple continents on their tour earlier this year.

Arteaga said: “That documents our summer playing festivals and going and playing small club shows overseas and just really reconnecting with our fans. For us, that’s so important, and our love for our fans and just music — not even just fans. Those are people that support us and support our vision and our dreams, not to mention music lovers.”

Carlile originally left OF MICE & MEN in 2010 after his doctor forbade him from touring to undergo heart surgery tied to complications with Marfan Syndrome. He returned in 2011, but his ailments didn’t cease, forcing him to exit the band for the second, and presumably final, time at the end of last year.

OF MICE & MEN in May surprise-released its second new song, “Back To Me”. Like “Unbreakable”, the new track was recorded with Grammy-nominated producer Howard Benson (IN FLAMES, ALL THAT REMAINS), mixed by Grammy winner Chris Lord-Alge (DEFTONES, MUSE) and mastered by Chris Athens (DRAKE, OZZY OSBOURNE). 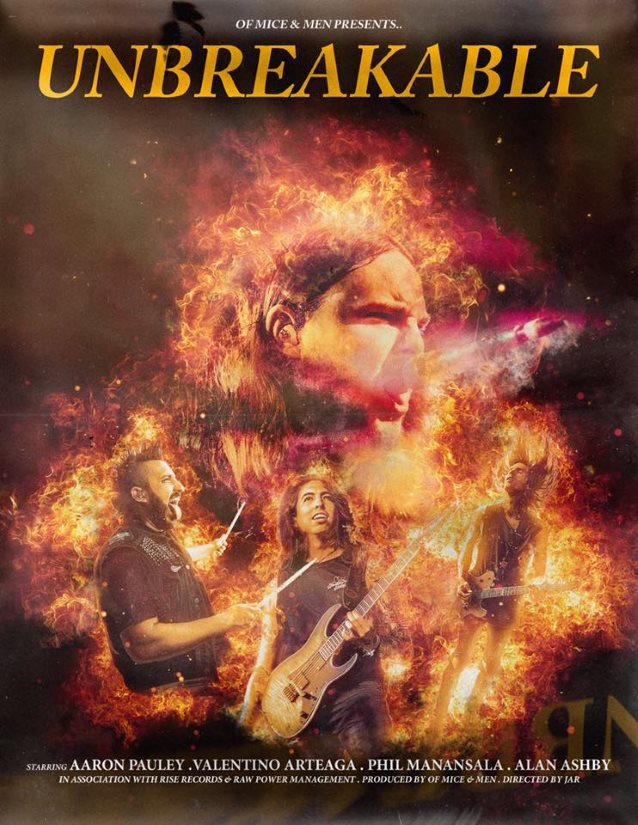