THE HAUNTED Guitarist On Threat Of Nuclear War: 'I Probably Would Feel Better If I Knew There Was Sane People On Both Sides'

Nev Pearce of Australia’s “Rabid Noise” podcast recently conducted an interview with guitarist Patrik Jensen of Swedish thrashers THE HAUNTED. You can listen to the entire chat below. A few excerpts follow (transcribed by BLABBERMOUTH.NET).

Patrik: “We’re not getting any younger, but he’s sounding angrier all the time. He’s turning into one of those bitter, angry old men, I don’t know. But yeah, we like it. [Laughs]”

On whether he feels there is a positive outcome from all of the negative things currently happening in the world:

Patrik: “I do. For example, the [Margaret] Thatcher years of Britain brought forth a lot of good protesting bands, you know, punk bands and so on. She was aimed at social reconstruction, but the problems we have today, like yesterday, North Korea blowing up a hydrogen bomb. Those stakes are a little bit higher than neutering unions or something. I do think that we will see good music, but I’d rather not to have the threat of nuclear war over North Korea and maybe not have the music output. The title of the album, ‘Strength In Numbers’, we’re not a political band at all, but we see the news just like everyone else sees the news. ‘Strength In Numbers’, if you want to create change of any kind, the more you are, the easier it will be to achieve your goals, then who is to say those goals are good or bad? These days, you can easily be tricked into thinking something which is not true. With Facebook or something, you can be duped into voting for something that twenty years ago you would not have voted for. The ‘Strength In Numbers’ is, there’s force in being many, but there’s forces behind people creating many people together, putting many people together. Just be careful of what you read. Make sure that what you say is really what you think. I don’t mind a president or a prime minister doing something bad, or a scandal. That makes people angry and you get good music. In this case, the stakes are just a little bit too high to feel comfortable. I probably would feel even better if I knew there was sane people on both sides, but I don’t want to be political here, but there’s a leader in one country that I don’t think is really that sane. So, it doesn’t feel that comforting.”

On whether THE HAUNTED has any guidelines for new members to follow:

Patrik: “No, the band is twenty years old. Of course, we do have some core musical values that a new member would have to try to follow. You also need to let people be creative or else you’ll bore them and they might leave. You really want someone, the more talented people you want, the more these people will want to contribute. You just need to, I think, get a general feel for what the band is about, then you can start contributing. Like, on [2014’s] ‘Exit Wounds’, Ola [Englund, guitar] didn’t write that many songs, but on this album he did, because he felt more comfortable. He had done one album with us already and now he can comfortably say, ‘Okay, these are my ideas.’ Not feeling that he took too much space, you know, all these things you can feel if you’re a new person in a work environment. We don’t hand out guidelines or anything. I think the people we choose, you need to be good at playing and you need to be a good person. I guess being a good person, that also includes this ability to somehow adapt in some way. You don’t have to bow to a whip or anything. This is the band. If you want to join us, don’t join us if you’re thinking you’re joining another band. We want your creativity, so please go ahead and throw out these crazy ideas. If they’re not good, we’ll tell you, but most likely we’ll try to work them out. When everyone else contributes… like if we played another band’s song from scratch, then it would probably sound like THE HAUNTED still and not like the other band because we had our input on everything from the start. Every band has their sound. Like if AC/DC played ‘Aces High’ by IRON MAIDEN, it would probably not sound like AC/DC.”

“Strength In Numbers” was released on August 25 via Century Media Records. The disc was recorded at Parlour Studios in Kettering, Northamptonshire, England with producer Russ Russell (NAPALM DEATH, DIMMU BORGIR, THE EXPLOITED). 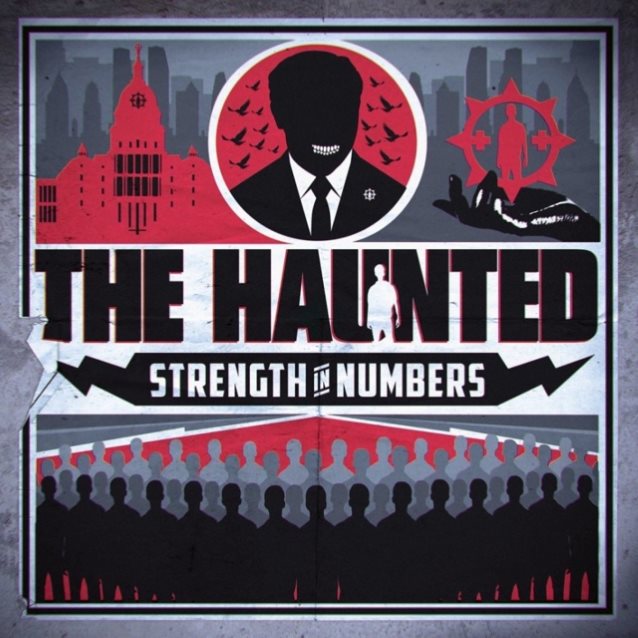 THE HAUNTED Guitarist On Threat Of Nuclear War: 'I Probably Would Feel Better If I Knew There Was Sane People On Both Sides'
Tagged on: HRRL
tom lats October 7, 2017October 7, 2017 Rock News No Comments